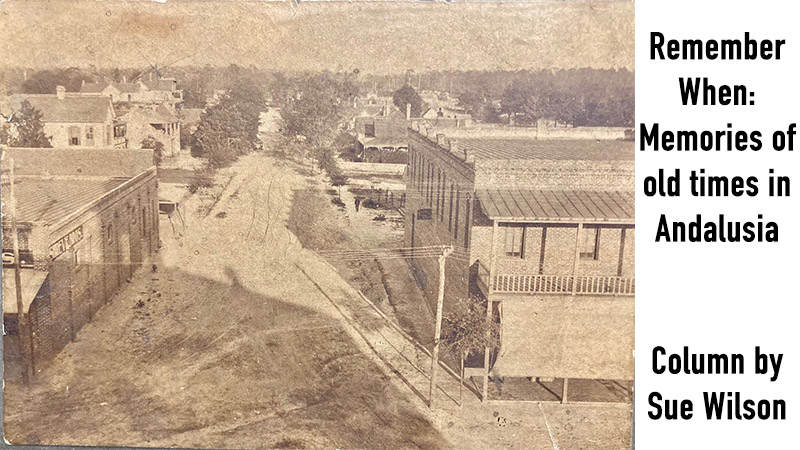 The new year of 2022 is upon us. It is good to reflect on the old year and think of what we accomplished in 2021. As I ran across an old photograph at the Three Notch Museum, I could not help but think of what all had been done by the citizens of Andalusia in the last 100+ years to establish and grow the town we live in today.

This photograph was probably taken in the early 1900s by someone standing in the upper floor of the courthouse that used to be located in the center of the Court Square looking eastward. The dirt street is East Three Notch Street. You can see wagon wheel ruts and horse hoofs in the dirt. The row of buildings on the left (north) side now housing WAAO radio station and lawyers’ offices had not been built yet. The row of buildings on the right (south) side housing Advantage Realty and Cagle Jewelry had not been built yet either.

There were no sidewalks, only boardwalks built over muddy walkways. There were hitching posts for horses and watering troughs all around the square not shown in this picture.

The Shreve and Sons building is shown on the left side since the Shreve family along with their feed and seed business moved from Searight in 1899 when the train line was extended into Andalusia. They took a chance like other merchants on Andalusia outgrowing Searight. One can see that the second floor of that building had not yet been added. That is the building now occupied by Attorney Mark Murphy, Vicki Popwell and Robert Evers Photography, and other tenants.

Farther down East Three Notch Street, one can see the large and full oak trees that once lined the street before it was widened many years later. A few residences had been built close to the square and that trend continued going eastward as building materials started arriving on the incoming trains.

Evident in the picture are chimney tops in the two-story building with the balcony which now houses Edward Jones and Company. Warmth was provided in those commercial buildings at the time by coal and wood fireplaces.

Not shown in this picture are the saloons that stood on the square. Brown and Broughton Drug Co. was located on the East Court Square at that time. Attorney Mike Jones occupies that building today. l was told by my Brunson kin who drove into town in 1899 by a mule and wagon loaded with a mother, father, and five children that they stopped at Brown and Broughton to get water and medicine for a sick child. They soon opened a hotel on South Cotton Street where they housed travelers getting off the train and where they raised 12 children for the next 30 years.

A stable and a blacksmith shop were right off the square. A furniture store and several merchandise stores were on the square as was a doctor’s office and several attorneys’ offices. A butcher’s shop and grocery stores were scattered around the business district; even an undertaker occupied the back of a hardware business, Benson and Co. Several church buildings rose in the area about that time as did an opera house which provided entertainment for the growing population desiring music and drama. A brick school building did not get built until 1902 but several one-room schoolhouses were around and about including the little red schoolhouse on College Street behind what became the East Three Notch School in 1914.

Where I am going with this story is simple. Progress has always been made when citizens have an idea, a vision for a project or for some business or home, and determination to get it done. There have always been people with what they called back then “git up and go.” That is how progress has been made through the years in spite of the Panic of 1915, the Flu Epidemic of 1918, World War I (1916-1918), the Great Depression of the 1930s, World War II (1941-1945), and so on.

Not many years after this photograph was taken, Andalusia had a beginning library, several banks, clothing stores, a town bakery, more hotels, a building and manufacturing plant, a telephone exchange, variety stores, a photography studio, a Masonic hall, an ice plant, several saw mills, a furniture manufacturer, a sausage plant, a horseless carriage dealership, a jailhouse, a power plant, a newer courthouse, a hospital, a textile factory, and a skyscraper!

I remember that phrase we mastered in typing class in high school. “NOW IS THE TIME FOR ALL GOOD MEN TO COME TO THE AID OF THEIR COUNTRY.”

Readers and fellow Andalusians, this new year is the time to consider being a part of the workforce if you are able. There are values in work including building character, reaching goals, setting examples for young people, developing responsibility, learning problem-solving, mastering self-control, and fulfilling happiness in life. I

Our town has the potential for real progress with the expectation of more business and industry, more entertainment, more opportunities for all this year if we work together to make it happen. When a new business opens, then we need to shop there and support it. When you are asked to join a civic club, just do it. When you think you don’t count as far as making things happen, think again.

You are important in the work force of Andalusia. If you are retired, encourage the young person in your family to prepare for a career and profession by getting an education. Join the chamber of commerce. There are retirees who are members. Your ideas, your sweat and tears, your voice, your help is all needed.

If you are proud of the town we live in, pick up trash and help to beautify your yard and neighborhoods and city streets. Participate in the 4th of July and Christmas parades. Support your local church and your school team.

Remember When Andalusia once looked just like this old photograph and remember this – DREAMS DON’T WORK UNLESS YOU DO. Happy New Year!