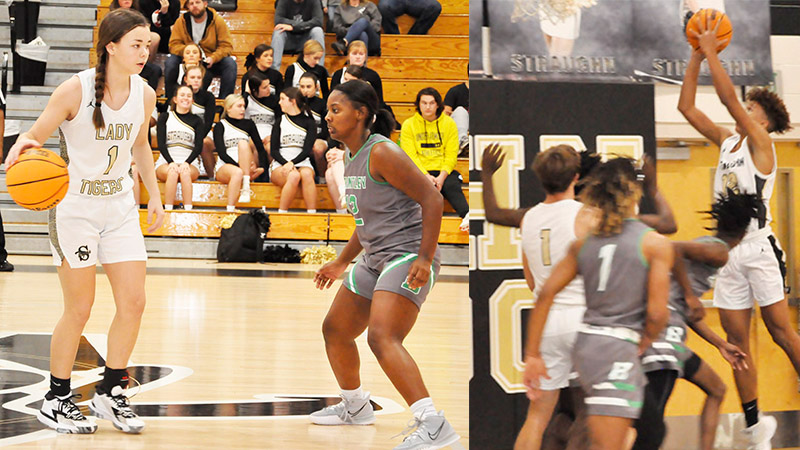 Straughn’s Presley Bates, left, looks to run the next play on offense against Brantley’s Sheonte’ Barginere. Parker Black, right, works his way to the hoop for the Tigers against Bulldog defenders.

Straughn hosted Brantley for three basketball games and opened the second half with a split as SHS won in varsity girls and BHS took the boys’ games Thursday.

Timely shooting coupled with strong defense propelled the Lady Tigers to a 37-21 win over the Lady Bulldogs in the varsity girls’ game. Straughn (4-13) started off on the right foot and led Brantley (6-6) 14-6 after one period. Ora Hall swished a pair of threes for the hosts while Abbi Hataway also got on the board from downtown. Kenya Clayton, Anna Free, and Kayden Dunn all had a basket for the visitors. SHS continued its big start and took a 27-10 lead into halftime. Hall tacked on six additional points in the second and was followed by Presley Bates with four. Hataway added another shot beyond the arc, and Annah Little hit a three for BHS.

The defenses were the tale of the tape in a low-scoring third period with six combined points. That took the score to 31-12 with eight minutes remaining. Bates drained a trifecta as Melonie Harris went one-of-two at the line. Brantley notched nine points in the final period with six from Dunn. Bryleigh McBride, Hall, and Harris each had a bucket for Straughn. 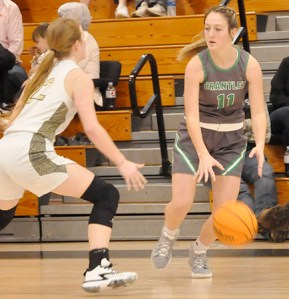 Melonie Harris, left, guards Annah Parker Little during a play on offense for the Lady Bulldogs.

“They jumped out to a big start hitting some good threes and getting in kind of a rhythm early. I was really proud of that, and it helped us. The defense was really good tonight. We gave up 21, but for the most part, we kept them under 20 for almost four quarters. The girls played hard and did a better job limiting turnovers. They were giving up some rebounds in the first half, but we fixed that and were able to make a run. When we adjusted in the second quarter going into halftime, it really helped us get over that hump,” SHS Head Coach Bradley Stephens said.

Hall paced the Lady Tigers with 14 points and was followed by Bates with seven. Hataway and Harris chipped in six and five, respectively. Dunn led the Lady Bulldogs with eight points.

The Bulldogs (10-2) made a big lead stand and did not let up in a 59-43 win against the Tigers (8-8) in the varsity boys’ matchup. Both teams were on point in the initial stanza with 33 combined points. Jayden Parks had nine points, and Kedrick Brown tallied five as BHS took an 18-15 lead. Abram Guilford scored 10 as Parker Black and Logan Arnett each added two for SHS. Robert Shine and Mount notched five apiece in the second and lifted Brantley past Straughn 36-18 at the break.

SHS put together a productive third period with a 17-point effort. Turner led all scorers with 10 in the frame. Black grabbed four as Riley Brooks buried a three. Morell Edwards, Jr. and Khaliq Smith had three each as BHS maintained a 46-35 lead heading to the fourth. Smith and Brown posted 13 in the final eight minutes for the Bulldogs, while Guilford and Turner both earned four for the Tigers. 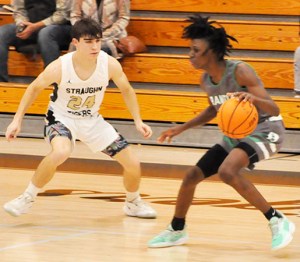 Riley Brooks, left, stares down Khaliq Smith during a defensive play for the Tigers.

Guilford and Turner shared the Straughn lead with 16 points apiece, and Black added six. Smith paced 16 points for Brantley as Parks and Brown also collected double figures with 14 and 13, respectively. Shine rounded out the effort with nine points.

All three teams began the area schedule Friday against Ashford at home and travel to Dale County on Tuesday, Jan. 11. 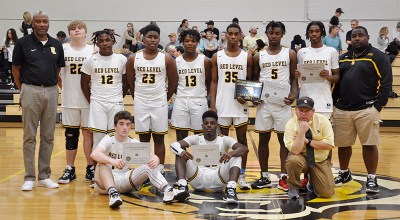