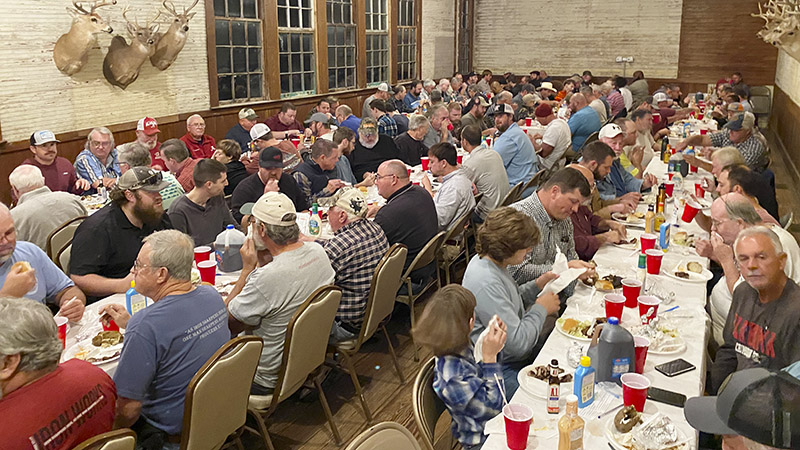 The Iron Works Men’s Ministry will hold its final meeting on Thursday, Jan. 20. For the past seven years, the group has provided ministry and services to men across Covington County.

The Iron Works Men’s Ministry had men gather and fellowship, but the time has come to cap this seven-year adventure with a final meeting Thursday, Jan. 20 at 7 p.m.

The meeting will take place at the Stanley Community Center at 17784 Alabama Highway 55 in Andalusia.

“The meetings were geared as a time of fellowship for men. Men could gather and hang out, eat a steak together, hear a little music, and hear a speaker. The speaker’s main goal each time was to lead men to know Jesus deeper,” Executive Director Mark Perry said.

He explained why the time had come to put an end to this ministry after seven years.

“Over the last year, we have tried to evaluate the ministry and what the future held. As we look back over this time, we have done and tried several different things to try and reach men. We want them to recover their heart and the abundant life God has for them to live. We did a men’s conference, a men’s retreat, adventure trips, a new school men’s meeting geared to high school boys, and small groups. During COVID, many of those things fell away. The old school men’s meeting has always been the signature event, but we suffered during the pandemic. I have been a part of Iron Works from day one. My vision and goals are changing, and along with the board of directors, we all felt like the time to end was now.”

Perry said meetings took place every third Thursday of each month at 7 p.m., and the first meeting was held Oct. 16, 2014. Ted Dibiase, a WWE professional wrestler known as “The Million Dollar Man” was the speaker at that meeting.

The last meeting will follow a similar format to previous meetings. “We will gather around the fire out back and hang out as the streaks are being cooked. We will have some music while eating and also have a couple of testimonies given by some of the men who have come over the year. John Ed Mathison, who has been a friend of the ministry from the beginning, will share a word of encouragement and a challenge to us as we wrap up,” he said.

Having a men’s ministry in the community was important, according to Perry. “We believe that men play a major role in their community, their churches, their homes, and the lives of their children and spouse. We wanted men to discover the abundant life that God gives to us through a relationship with His son, Jesus. Men play a major part in society, but many have lost heart. We wanted to help them get their heart back.”

There have been many highlights along the way at the ministry. “We’ve had the opportunity to meet and hear from some great men during this time. I think one of the major highlights has been to hear the stories of how lives have been changed. Many men were leaving their wives, and marriages were restored. Some men had ‘checked out’ in their role as husbands and fathers, and they have since re-engaged to lead their families. To see life change has been great,” he said.

Perry added that there are no plans to start a new men’s ministry because other organizations already have some in place.

“They have formed because of the impact of Iron Works. Several other communities have monthly men’s meetings after hearing and see what we did at the Old School Men’s Meeting. Many churches have started or restarted their men’s programs after seeing and being a part of Iron Works events. That’s really what we desired would happen. We wanted men to go back to their communities and churches with a desire to reach men around them and pour into their lives.”

He is grateful to have been part of the ministry during the duration of its time.

“I’m just one man in an army of men. My wife, Kaci, has been one of the biggest supporters along the way. Several other women have also helped to make Iron Works successful. We could not have done it without the volunteers. The list is too long for me to name, but I’m grateful to each of them,” he said.

“God seemed to always provide for our needs financially with our meetings and has been the one that opened the door seven years ago. He has been the one leading us down this journey, and as we come to a close, we believe Him to be the one closing this door,” Perry said.