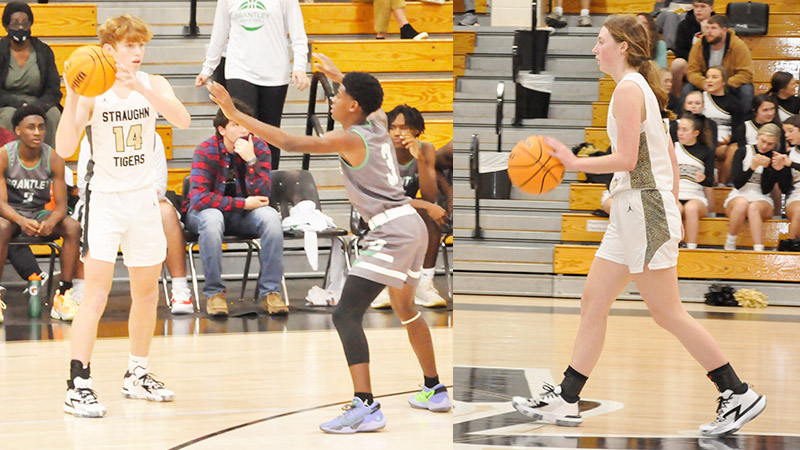 LEFT: Daniel Bell looks for an open man in a prior game. Bell had seven points in Straughn's win over Ashford. RIGHT: Ora Hall takes the ball down the court for the Lady Tigers in a previous game. Hall finished with eight points against Ashford.

Straughn laid out the broom to the tune of a three-game sweep in area basketball action at Ashford on Friday, Jan. 14.

The Lady Yellow Jackets held a slim 10-9 lead after the opening period. Amiyah Lewis had five points, and Hope Hogan added three in the frame. Bryleigh McBride picked up a pair of baskets for Straughn as Ora Hall chipped in three points. Hogan and Lewis combined for 11 of the 13 scored by AHS in the second. Melonie Harris earned three, while McBride added another field goal, and SHS trailed 23-14 at the break.

The Lady Tigers woke up with a 16-point showing in the third. Abbi Hataway made it rain from downtown twice and had 10 points. McBride continued to sizzle with two more buckets. The defense only allowed eight points, and action shifted to the fourth with the Lady Yellow Jackets maintaining a 31-30 lead. Hataway and McBride both collected four in the final eight minutes. SHS closed out its strong second half with 12 points in the final period and once again stymied AHS, who mustered only seven down the stretch.

“We came back from being down nine points at halftime. The girls got back to doing the little things right and played really hard. Abbi and Bryleigh had some big shots at the right time,” SHS Head Coach Bradley Stephens said.

Hataway and McBride shared the team lead for Straughn with 14 points each, and Hall finished with eight. Hogan had 17 to pace Ashford in the loss as Lewis had 12 points.

The Tigers stormed out to a 15-0 lead at the end of one. Riley Brooks had a pair of threes in the first, and Daniel Bell also found the net from downtown. Parker Black had two baskets in the second as Micah Turner scored three, and Abram Guilford collected two. The Yellow Jackets scored their only points of the first half on two free throws and trailed 28-2.

Kobe Small hit a three in the third for the only made field goal of the game. It did not produce much momentum as Ashford only managed four in the period. Brooks and Black both chipped in three to help Straughn score 10 and widen its lead to 38-6 going to the fourth. Devin Williams knocked down a shot beyond the arc in the final eight minutes for SHS. Turner also added three, and Black scored another basket. The final six points for AHS came from the free-throw line.

“These young men are continually improving in every area of the game. They know what is at stake, and you can see their determination on and off the court. They have pushed themselves in practice every day. It is an amazing thing to see them accomplish what they have worked so hard for. You know you have a special team when players text you to try and get into the gym to work on their own time. We have really focused on defense these past few weeks, and the Ashford game showcased what these guys have the ability to do against a high-caliber team. These Straughn Tigers are driven and as a coach, I am extremely proud of them. I’m excited on what is ahead for our team in the upcoming weeks,” SHS Head Coach Trevor Driver said.

Brooks and Black both paced Straughn with 11 points each. Turner also finished in double digits with 10, and Bell notched seven in the win. Cade Weller led Ashford with four points, which all came from the line.

In B-team action, Straughn posted a 47-37 win over Ashford to start the day. Layne Grantham finished with 15 points for the Tigers and was followed by Laeton Smith, who added six. Kaden Wiggins and Clark Gay each tallied five in the win. Braxton Anderson led the Yellow Jackets with 10 in the loss.

Straughn returns to area action Tuesday, Jan. 18 at Geneva. The B-team game is scheduled to get underway at 4:30 p.m.