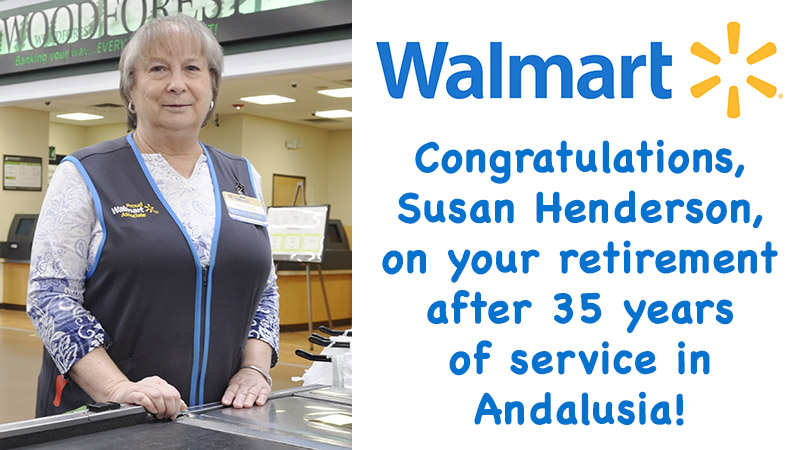 Susan Henderson, an associate with Walmart in Andalusia since 1987, will retire from the company following a 35-year career on Friday, Jan. 21.

Susan Henderson will soon be hanging up her navy vest for good as she is retiring from the local Walmart store following a 35-year tenure with the company.

Henderson began her career at the Andalusia Walmart on Aug. 24, 1987, as a department manager for the garden center and Christmas sections.

Henderson chose to retire this year after serving as an associate at the local store for 35 years. “I have always been told, ‘You will know when it’s time.’ I didn’t want to wait until I was at the point in my life, where I would not be able to enjoy the things that I enjoy now. I can still enjoy all the things I love to do, so ‘that time’ is now. I will miss my friends here and seeing the customers.”

Henderson’s final day at the store will be Friday, Jan. 21. Walmart is holding a retirement party in her honor beginning at 10 a.m.

In the last 35 years, Walmart has changed significantly over the years, according to her. “There has been a lot that has changed. When I started in 1987, we did everything on paper and manually from ordering, pricing, and making price changes. Today, all those things and more are done on the computer.”

She is grateful to have had the opportunity and experience of working with a single company for as long as she has. 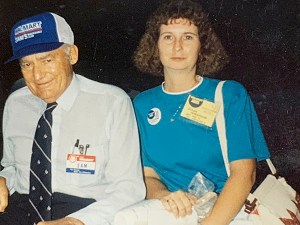 Henderson had the opportunity to meet Walmart founder Sam Walton at the company’s annual shareholders’ meeting in 1990.

“Sam Walton started a company that looked after his associates. Yes, there has been a lot that has changed over the years, but I am still proud to have worked for a company started by Sam Walton. In 1990, I had the privilege of attending Walmart’s annual shareholders’ meeting and had the opportunity to meet Mr. Walton himself,” Henderson said.

When asked what she is looking forward to the most about retirement, she had a quick but easy response. “There will be no need for setting an alarm clock.”

Following her retirement, Henderson plans to spend more time with her family, work in her yard, and read books. “I travel on bus tours with Betty Mitchell doing Betty’s Alabama and Florida Tours. I plan to do more of that, too.”

Henderson is one of four original Walmart associates who have been with the store since it was established in Andalusia in 1987. She is the first to retire as Chandra Fowler, Cindy Kervin, and Clarise Weaver are all still employed by the store.