(Editor’s Note: This is the first of a six-part feature series highlighting the 2022 football schedules for the schools of Covington County.)

With a larger region than years past, Florala is looking forward to building up experience from last year’s team in time for the 2022 football season.

The Wildcats will remain in Class 1A but shift from Region 1 to Region 2 and now compete in a nine-team region. Chris Littleton is entering his eleventh year overall as a head football coach and third season with Florala. 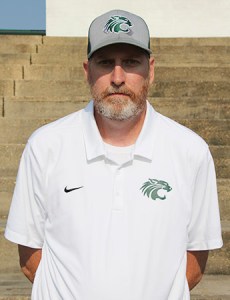 “We are excited about the upcoming season. The nine-team region did offer up some challenges in scheduling, but now that it is done, we look forward to it,” Littleton said.

The region schedule will be similar as in the last few years with a key addition.

“Our region is definitely a challenge, but we look forward to it. We have been competing with most of these teams the last couple of years, and it’s always a very competitive region,” he said.

FHS will welcome Zion Chapel for a preseason jamboree Friday, Aug. 19 at home. Regular season play kicks off the following week with a visit from Red Level in the first region contest. Florala then travels to Georgiana in the first of three consecutive road games beginning on Friday, Sept. 2. The Wildcats encounter their first non-region foe at Southern Choctaw the next week and close the three-game road swing at Pleasant Home. Samson will visit FHS for the second non-region contest of the year on Friday, Sept. 23.

Littleton discussed how the two non-region opponents on the schedule were filled. “We definitely wanted to keep Samson. We have a lot of mutual respect and friendships between us, so it’s a good and fun rivalry. With the other spot, we just wanted to play someone in our same classification. With it being an abnormal off week, we only had a couple of options across the state. We were fortunate to get Southern Choctaw in that spot since they are in our same classification.”

The second half of the schedule will be a five-game region stretch for Florala beginning with a road trip to Houston County. After a home game against McKenzie to begin October, the Wildcats head to Elba in the final road outing. FHS will then host Kinston in the penultimate region showdown and welcome Brantley in the final regular season game on Friday, Oct. 28. 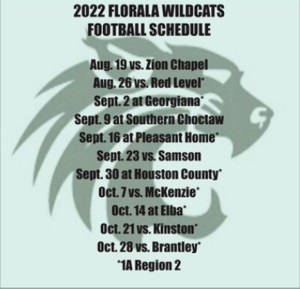 “I am grateful to be at a great place like Florala and grateful to be able to work with the great coaches and players at Florala. We had a very young team this past year, and we have several players returning that played or started for us. I believe the future is bright for our program,” Littleton said.

Florala finished the 2021 season with a 3-7 overall record.