After last year’s seniors laid the groundwork, Pleasant Home hopes to continue working hard and carry that momentum into the 2022 football season.

The Eagles stay in Class 1A but move from Region 1 to Region 2 and will now join eight other teams in a nine-team region. Jeremy Silcox goes into his second year overall as a head football coach, both at Pleasant Home, but has been an assistant for seven years. 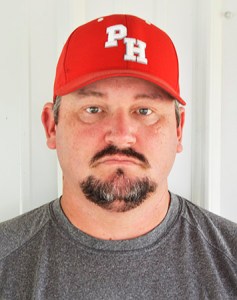 “We inherited a nine-team region, so our schedule was pretty laid out for us. We start with A.L. Johnson week zero for our first non-region game. We play at Zion Chapel in week five, who has become a staple on the schedule. We already had a tough region, and although we did lose Samson, we did pick up Elba and Houston County,” he said.

PHS will square off with A.L. Johnson in the season opener Friday, Aug. 19 at home. Following a bye week, September kicks off with back-to-back region road contests at Red Level and McKenzie. The Eagles will return home to host Florala in a county matchup for the first region home game. Pleasant Home makes a midseason trip to Zion Chapel after previously playing the Rebels the last game of the regular season in six consecutive years.

As the case has been for the last few years, the region will be loaded from top to bottom, according to Silcox.

“Brantley and Elba are always perennial powers, but every team in the region is tough. Georgiana was young this past year, and first-year coach (Berry) Bess improved those guys every week. Each week requires top preparation and is physically demanding in this region.”

Silcox chose one of his non-region opponents based on a prior coaching stop, and the other remained the same from years past. “I already have a great relationship with Coach (Eugene) Foster at A.L. Johnson. He and I coached against each other at the middle school level when he was at Selma, and I was at Demopolis. Coach (Randy) Bryant at Zion Chapel’s guys are always class acts, and we feel the game is good for both schools.”

A short road trip to Kinston closes out the month of September for Pleasant Home. The Eagles meet four straight region opponents in October with three of those contests at home. PHS faces Houston County and then travels to Brantley the next week. After a battle with Elba, the regular season concludes with Georgiana on Friday, Oct. 28. 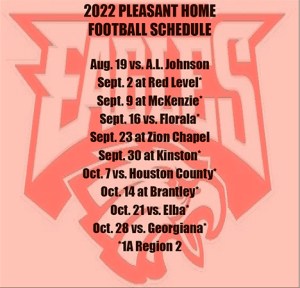 “I love Pleasant Home and love these kids here. It is an honor, and to see how much these guys improved over the year makes me feel humbled and proud. I am grateful for the foundation these past year’s seniors laid for our team. I look forward to how it translates to this next batch of Eagles’ performance on the field. I am proud of the coaching staff we have put together and am thankful for the leadership of our administration in Mr. (Marc) Tracy and Mrs. (Amber) McKathan,” Silcox said.

Pleasant Home finished the 2021 season with a 1-9 overall record.