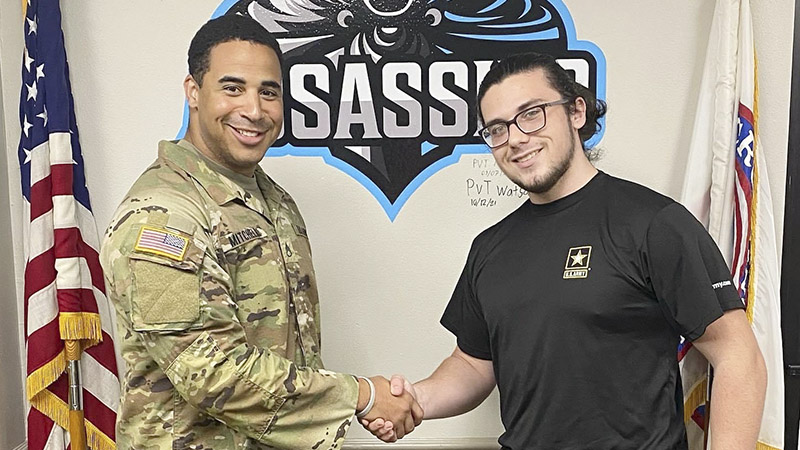 Straughn High School senior Justin Jordan wants to serve for his country and looks forward to enlisting in the U.S. Army following his graduation in the spring.

“I joined because as far back as I can remember, I’ve always looked at the armed forces as my dream job. I knew that I wanted to protect my homeland. I feel with all this country has offered and blessed me with, it’s the least I can do. I hope to become a much better person during this experience. I believe the Army will teach me lessons that will make me into the man I want to be in the future,” Jordan said.

He will graduate from Straughn on Friday, May 27, and leave for basic training on Tuesday, June 14.

“Justin Jordan is one of our top future soldiers at the Andalusia Army Recruiting Center. He is dedicated and loyal and constantly is striving for success. He is the epitome of what it means to be a United States Army future soldier. I look forward to watching Justin grow as a soldier and all his future accomplishments,” said Staff Sergeant Breon Mitchell.

Jordan is excited for the opportunity to serve in the United States Military.

“I look forward to being able to prove to myself that I can fight alongside the brave men and women who are fighting today. In the next few years, I hope to see myself applying to airborne school and making it through the tough training.”

He added that he chose the Army more than another branch of the military because of its size and availability. “The Army is the largest branch and offering the most jobs, so I knew that I would be able to find the right one for me. I had the help of three great recruiters at the Andalusia Army Recruiting Center: Staff Sergeant Mitchell, Staff Sergeant Sholz, and Staff Sergeant Oppong-Agyare.”

He will join other members of his family who have served their country. “My uncle is a Marine. I also had a great uncle in the Navy and another one in the Air Force. Both of my grandfathers served in the Army,” Jordan said.

He believes freedom is important because it is what makes the United States of America so great. “We are born with the freedom to be who we want to be and love who we want to. Many countries don’t offer such privileges.”

He is the son of Anthony and Karla Jordan and has an older sister, Chyanne; twin sister, Lana; and two younger brothers, Brodey and Charlie. His family and a friend of his have helped lead him to join the armed forces.

“My parents and uncle inspired me. I also wanted to thank TJ Hall for pushing me to join. He helped and I’m glad to have him with me in the Wednesday training and ruck marches. The movies I watched as a kid also kept my interest,” he said.

“The support of my family has been the best, and it has helped greatly. They are the ones who have kept me with it and are with me through it all,” Jordan said.