Mrs. Myra Sybil Ezell Smith, a resident of Dothan and formerly of Andalusia, died Saturday morning, January 22, 2022 at the age of 92. 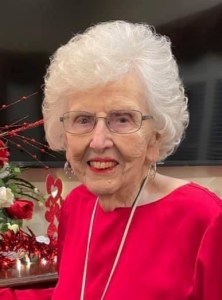 Mrs. Smith was born Oct. 7, 1929 at home in the Long Street Community of Dale County. Her parents were Irma Blackmon Ezell and Charlie C. Ezell.  She attended Ozark City Schools, graduating early from what was then Dale County High School.  Attending business college in Dothan, she purchased bus tickets from her future husband, Charles Franklin Smith, who followed suit and began attending the business college too.  They married in June 1954 at Ozark Baptist Church. An efficient stenographer for decades with private and state agencies, she treated others with respect and kindness.  She and Charlie lived in North Augusta, South Carolina and Augusta, Georgia (where their two daughters were born), Columbus, Georgia and her adopted hometown of almost 50 years, Andalusia, Alabama.  There she enjoyed many friendships and her church home, First Baptist Church of Andalusia.  Leaving Andalusia, she made her home at Whitehall Assisted Living in Dothan for the past five years.  Known for her quick wit, compassion for others, notes of encouragement, prayer ministry and convivial personality, she adapted to life changes with grace. She was preceded in death by her parents and her husband.

She delighted in time spent with her first great-granddaughter, Harper Claire Owens and recently celebrated the birth of her great grandson, Eli Fuller Roberts.

The family would like to thank friends and the staff and residents at Whitehall Assisted Living.