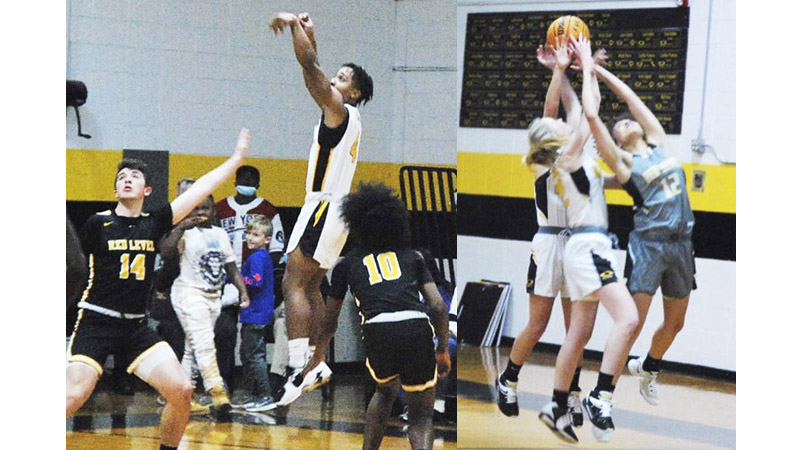 LEFT: Red Level’s Caleb Padgett, left, and Javen Poindexter defend a three-point shot from Opp’s Terry Davis. RIGHT: Cuba Wiggins of the Lady Bobcats, left, and Alyha Robertson of the Lady Tigers go up for a rebound and control of the ball. (PHOTOS BY TRIPP NORRIS)

A top ten county matchup finished with a split in a pair of varsity basketball games Monday night as Opp won twice before Red Level averted the sweep.

RLS held an 18-12 lead after eight minutes and took a 38-21 halftime lead. OHS came out in the third with a strong showing on both sides of the ball to cut the deficit to 47-35. Both sides lit up the net and combined for 39 points in the final period. Opp scored 23 and saw its comeback bid fall just short. Red Level finished with 16 in the fourth.

Both offenses roared out of the gate as Red Level took a 14-11 lead after the first and pushed the margin to 30-21 at the break. Opp responded with a big third period and trimmed the gap to 39-36. The two teams gave it everything they had as action came down to the wire. Vanessa Stoudemire made three free throws with 0.7 seconds left to win the game and complete the comeback.

Stoudemire had 21 points, eight rebounds, and four assists to lead OHS in its first win over a ranked team since the 2012-2013 season. Kyla Rhodes collected 10 points and seven rebounds as Cuba Wiggins notched 10 boards. Ruby Carroll paced RLS with 13 points and was followed by Kaitlyn Beverly who had 11.

“The boys played a very good Opp team and maintained the lead through the entire game. Our players played hard and smart and maintained their intensity and composure throughout the game. We have three games left on our schedule before we start the area tournament. The girls played well enough to win but suffered too many mistakes in the last few minutes of the game. However, I give Coach (Keith) Womack and his players credit because they did not give up. We will definitely get back to practice and work on our mental mistakes to get ready and take on Straughn,” RLS Head Coach Bridges Anderson said.

Opp led by one at the break in the B-team game but outscored Red Level 30-5 in the second half for a 48-22 win. Joshua Smith paced the Bobcats with 14 points, and Shambrian Mayes scored five for the Tigers.

Both teams are back in action on Friday, Jan. 28. Red Level visits Straughn, and Opp concludes the regular season with an area matchup against Goshen at home.