(Editor’s Note: This is the fourth of a six-part feature series highlighting the 2022 football schedules for the schools of Covington County.)

After exhausting many miles and making several road trips in recent years, Andalusia will not have as much ground to cover during the 2022 football season.

The Bulldogs return to Class 4A after spending two seasons in Class 5A and join seven other teams in Region 2. Trent Taylor enters his 35th season as a head coach and leads his alma mater for the eighth consecutive year after taking over the program in 2015. 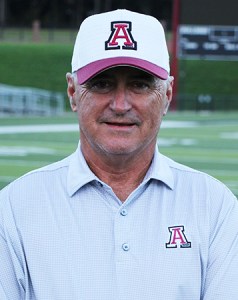 “Classifications change every two years, but it’s funny how a lot of the time, the teams don’t change. Being put in the region we are in now, our travel has reduced a bit. In south Alabama, we are so far apart that travel is going to be a part of your schedule especially in region play. You’re also seeing some of the rural Wiregrass schools grow in numbers,” Taylor said.

AHS will get the season underway Thursday, Aug. 18 at home against longtime rival Opp. The Bulldogs hit the road to Milton in Florida the following week and begin September with the region opener at Dale County. Andalusia returns home to face Bullock County and concludes the first half of region play at Montgomery Academy. The final non-region matchup will be Friday, Sept. 23 at Bibb County.

“With us playing Opp again, it’s a game both communities wanted to see happen. We’re excited about it and didn’t really have a rivalry game the last two years. It’s good to have that game back. Milton is a growing program. Where we’re located, to have an opportunity to play schools in the Florida Panhandle, Milton is not a bad drive as travel has a lot to do with that. We are familiar with Bibb County. Coach Matt Geohagan is from the area and played high school ball in Florala. He is doing a tremendous job building a program up there.”

Andalusia will host Geneva and Slocomb in back-to-back region contests to start the second half. The Bulldogs meet B.T. Washington in Tuskegee for the final road game and end the regular season at home against Montgomery-Catholic on Friday, Oct. 21.

“Our region is from the Wiregrass to the Montgomery area and down to us. The biggest thing for us is that we will be with some teams more familiar to our fan base,” he said. 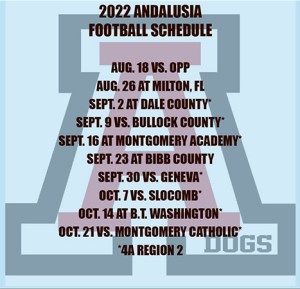 Being at Andalusia is very special to him considering it is home and where he grew up.

“It’s hard to believe I’ve been coaching for 35 years and eight here. I feel like being back home is everybody’s dream at some point. It happened later in my career, but it gives you a sense of pride to be at a place that was so good to you. I think any coach will tell you to have the opportunity to come home is a blessing,” Taylor said.

Andalusia finished the 2021 season with a 9-5 overall record.