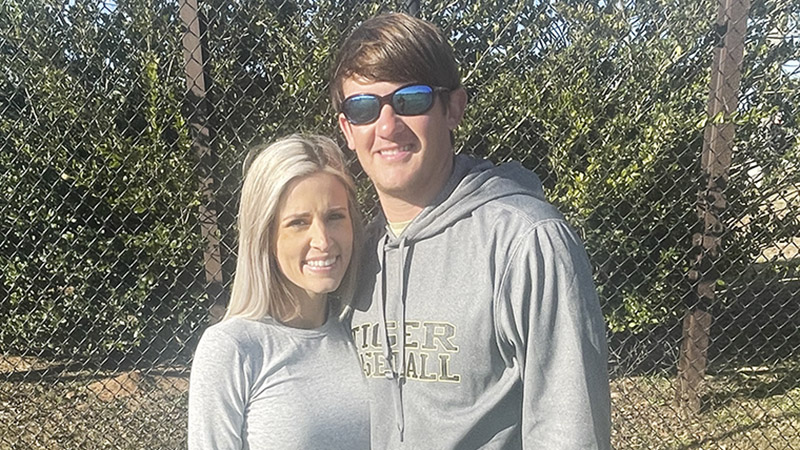 Straughn Head Baseball Coach Andrew Lowery and his wife Calen look forward to the 2022 varsity baseball season with the Tigers.

Andrew Lowery wants the next three weeks to fly by as he takes over the Straughn baseball program and leads a varsity team for the first time in 2022.

The Tigers face Satsuma in Luverne to begin the season Friday, Feb. 18 at 6 p.m. and play Kinston in the first home game Friday, March 4 at 4:30 p.m.

“I played four years of varsity baseball at Brantley High School. I spent two years as head middle school baseball coach at Charles Henderson and two years as head middle school coach at Demopolis. It has always been a goal of mine to become a varsity head coach. Being able to lead this group of young men is truly an honor. I’ve got a really good assistant coach in Jacob Free who I’ve known for a long time, and we’re excited about making the most of our opportunity,” Lowery said.

He graduated from Brantley High School in 2013 and received his bachelor’s degree from Troy University in Physical Education in 2017. 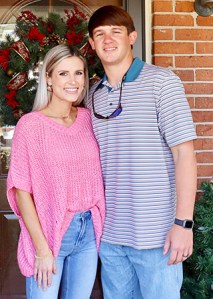 Andrew and Calen Lowery enjoyed spending the holiday season with their families.

Although he is new to Straughn, he has knowledge of the school’s baseball history. “I’ve always had a tremendous amount of respect for the Straughn baseball program. I grew up playing against them in high school, and their teams were always held to a very high standard. This group is coming off a 16-7 record and a round 1 playoff appearance. We’re looking to build off of this experience and take it to the next level.”

This year’s varsity team has discussed their goals and outlook for the 2022 season. “I told the guys during our first team meeting that our goal as a program is to compete and play for championships. We want to compete to win the region and to put ourselves in a good position to win the playoffs. We have a great group of seniors who we are depending on to lead this team. We’re returning several starters and our entire pitching staff from this past season. We also have some younger guys with really good talent we expect to play a big role.”

He wants to make a difference in the lives of his players and build a successful program.

“It’s the reason I decided to go into coaching. The impacts and relationships my former coaches had on me molded me and shaped me into the man I am today. I want to help teach our guys how to be good men. I’m very passionate about the game and have always had a competitive mindset. We want to build a winning program that does things the right way and isn’t afraid to compete,” Lowery said.

He added that his most successful moment as a coach to this point came during Straughn’s 2021 football season. “Coach (Ashley) Kilcrease came in and did an outstanding job in his first year here getting the guys to reach their full potential as a team. I’ll always be thankful to him for giving me the chance to be a part of it, and I believe the best has yet to come.” 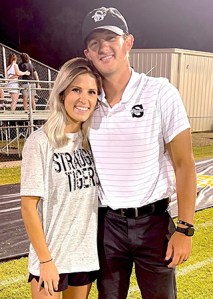 Andrew and Calen Lowery were happy to be a part of the Straughn varsity football team during the 2021 season.

His coaching philosophy is an easy concept for the players to understand. “My philosophy as a coach is to teach these young men to earn everything. As a staff, we want them to buy in and believe they can achieve anything in baseball and in life. To do so, they have to consistently put their head down and go to work each day to reach the level of success they want to reach.”

Lowery typically has a relaxed and loose mindset on game day. “We will prepare and throw every scenario at them in practice so that hopefully when game time comes around, the game will slow down for us. We can just get out there and focus on competing and playing.”

He is married to his wife, Calen, and is the son of David and Kim Lowery with a younger brother, Trey.

“The support of my family and the Straughn community means everything. My wife, mom, dad, and brother are always there for me, win or lose. The Straughn community has welcomed us with open arms, and the support they have for this school is unlike anything I’ve been a part of. I would just like to thank Mr. Driver and the entire administration at Straughn Elementary, Middle, and High School for giving me this opportunity,” Lowery said.