Straughn holds on for rivalry sweep over Red Level 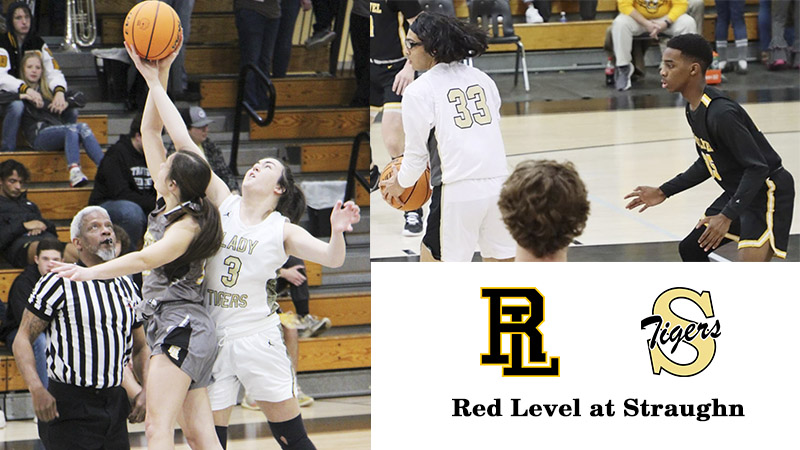 The fourth time proved to be the charm for the boys as Straughn capped a three-game sweep over Red Level in basketball action Friday.

Ora Hall began the game on fire with a pair of threes and had eight points as Abbi Hataway and Bryleigh McBride each scored four. Ruby Carroll and Elizabeth Cross combined for nine points, but Straughn built a 16-9 lead. Hataway and Hall both swished threes in the second, and Anna Driver found the hoop for two. Carroll converted four free throws for Red Level as the halftime score stood at 24-17.

Cross had the hot hand with eight points in the third, which included two shots beyond the arc. Carlin Bates and Melonie Harris etched their names in the scoring column as RLS crept back within five at 32-27. Hataway garnered six in the final period for SHS. Carroll closed out the game with three of the opposition’s six points.

Hataway and Hall paced Straughn with 13 points each, and McBride added seven in the win. Cross was the scoring leader for Red Level with 16, while Carroll collected 12 in the loss. 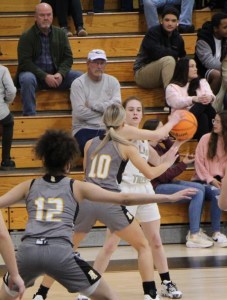 Kaitlyn Beverly guards Abbi Hataway who gets set to pass the ball to an open teammate. (PHOTO BY YOLANDA BEVERLY)

“The big thing this whole year has been trying to improve every game. This week, we played Geneva tough and got beat, turned around and played pretty well against Samson, but I thought we really built on that Samson game in playing Red Level tonight. I thought we improved even more and shot the ball well in the first quarter. We had to make some changes after we lulled off a little bit, but the girls did a good job of adjusting. That’s not taking anything away from Red Level, who has a very good team. They’re doing well in a tough area, and it was a big win for our girls after losing to them at their place,” Head Coach Bradley Stephens said.

Micah Turner started the contest strong with six points, while Abram Guilford followed with four and gave Straughn a 10-9 lead. Demarcus Johnson earned four, and Caleb Padgett knocked down a trifecta. Padgett continued to shine with five in the second. Javen Poindexter and Johnson both had four before Malikye Wright collected two. Daniel Bell buried a three, but Red Level carried a 24-17 lead into the break.

The offenses woke up with a combined 32 points in the third. Turner led the way with 10 as Guilford notched six. Johnson converted four field goals, and SHS trimmed the deficit down to 38-35. In a fight to the finish, RLS held its own and maintained the lead for most of the fourth. Wright garnered seven with a three-pointer and went four-of-four at the foul line. Turner made the go-ahead basket with 34.7 seconds left, and Riley Brooks had four points. Taylor Sikes added a long-range three in the final eight minutes.

Turner blistered the net for 26 points to pace Straughn as Guilford and Bell had 14 and six, respectively. Johnson took top honors for Red Level with 18, while Padgett and Poindexter grabbed 11 apiece. Wright rounded out the visitors’ scoring quartet with nine points. 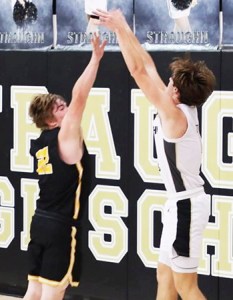 “When anyone plays a team like Red Level, you know every shot, rebound, and decision made could be the difference between a win or loss. These Straughn Tigers are starting to figure out that every possession needs to be played as if it is the determining factor when the last horn goes off. I cannot praise these guys enough as well as the wisdom Coach (Rusty) Andrews has brought to Straughn. He drives almost two hours one way to invest his time into these guys, and it is paying off. Hats off to Coach (Bridges) Anderson. He is an amazing coach and what he is instilling into those Red Level Tigers will last a lifetime long after basketball ends,” Head Coach Trevor Driver said.

Straughn (13-5) earned a 54-23 win over Red Level (7-15) in the B-team game. Kaden Wiggins led SHS with 17 points, and Layne Grantham chipped in eight. Buddy Griffin paced RLS with nine points and was followed by Shambrian Mayes at eight.

Both schools head into the final week of the regular season. Straughn opens the week Monday, Jan. 31 at Brantley beginning at 4:30 p.m. Red Level travels to J.F. Shields in the final area game Tuesday, Feb. 1 starting at 5 p.m.