Despite having just four games at home, Opp hopes for a deep playoff run and will see some different teams in the 2022 football season.

The Bobcats remain in Class 3A and join eight other teams in Region 2, which now has nine teams. Mike Dubose goes into his eighth year of coaching high school and leads his alma mater for the second straight season. He also made two college stints including one at Alabama from 1997 to 2000. 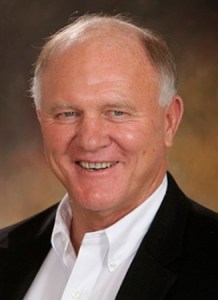 “We have five new opponents we didn’t play the last two years. Andalusia is a big game, and it was good to get them back on the schedule. They will be a quality opponent we are excited to match up with. We also have Northside Methodist, Pike County, Rehobeth, and Ashford. Straughn comes back into our region, but we played them the last two years,” he said.

“It’s a little bit of a concern to have only four home games. When you’re playing this many new teams, that’s the way it works out. We would love to have five and five but will have six and four next year. You have to be able to go on the road and win like you do at home if you want to make any noise in the playoffs.”

Working out an agreement with the two non-region opponents was good, according to Dubose. “I’m an old-school Opp guy and believe Opp and Andalusia should be competing in everything. I’d rather play them early than late. We’re excited to renew the rivalry, and it will make our team better. Rehobeth is in the middle of the season and gives us an opportunity to play larger, faster competition. It worked out for us to have a 10-game schedule, which helps with scheduling in a nine-team region.”

The Bobcats start October at Daleville and will host region teams Houston Academy and rival Straughn. Opp makes the trek to Ashford in the season finale Friday, Oct. 28. 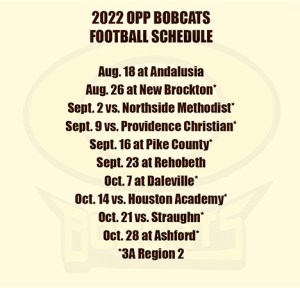 “Opp is home. We have a rich tradition here and have to get back to that at some degree. We have to continue building a program and need to make it beyond the second round of the playoffs. We have enough talent to be better than that, and starting on a Thursday night should be beneficial to both teams. It’s a great opportunity for both teams to play at a great venue. We have a lot of work to do and are excited about implementing some new things with our program during the offseason,” Dubose said.