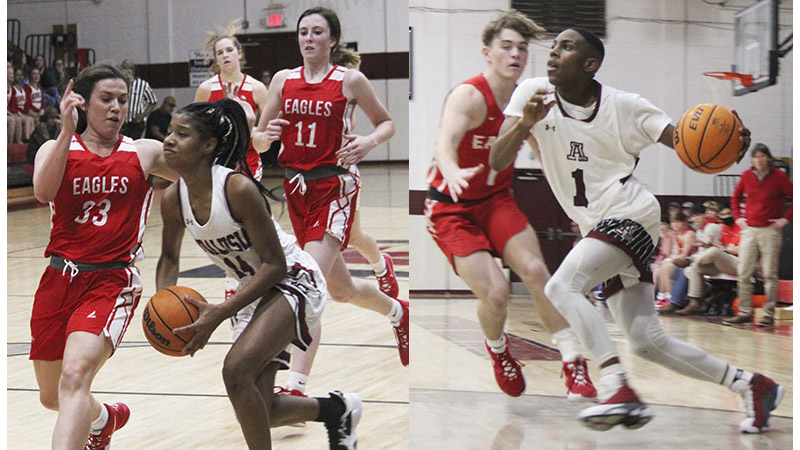 LEFT: Pleasant Home’s Aubrey Pittman, left, defends a drive to the hoop by Andalusia’s Kamari Gay. RIGHT: Ty Clark, left, looks to make a defensive stop for the Eagles against Nashaun Wilson of the Bulldogs. (PHOTOS BY HOLLEY BASS WINGARD)

Andalusia wanted to put together a solid senior night showing and accomplished that by taking three straight basketball games from Pleasant Home Tuesday.

Both teams started the game with strong showings as they combined for 23 points. Zanyia Anderson knocked a pair from downtown to help AHS grab an early 12-11 lead. Amy Garner had nine points in the opening period for PHS. Dianna-Grace Nelson and Jahdiya Lowery led Andalusia with five each in the second, and Anderson added her third trifecta. Hailey Ward chipped in a dozen and helped Pleasant Home to a 27-25 lead at the break.

The Lady Bulldogs clicked on both sides of the ball in the third and surged to a 37-30 lead. Kamari Gay notched eight points as Garner scored the only three for the Lady Eagles. Lowery and Anderson combined for seven to lead Andalusia in the final frame. Pleasant Home received four apiece from Garner and Lexi Straughan, while Aubrey Pittman added a basket.

Anderson and Gay paced AHS with 12 points each and were followed by Lowery at 11. Garner and Ward were the PHS top scorers with 14 and 12, respectively.

“We applied a lot of pressure and got some steals to get ourselves back in the ballgame. We sped them up a little bit with the intensity of playing fast and tried to take their top two scorers away, so somebody else would score. We have been playing really good teams lately and have had a lot of close games. We have been struggling to find a way to win, so that was a good fight for us to win,” Head Coach Bennie Shellhouse said.

Ethan Curry drained a pair of threes as Pleasant Home led early. Jordan Stallworth and Tevin Sigers both began the contest with four points and helped Andalusia draw even at 13-13 after one. AHS found its groove in the second and took a 27-18 halftime lead. Bryce Dorsey led the charge with six points. Aksh Patel and Cammeyun Love each added a three-pointer. Curry and Mason Anderson combined on five free throws for PHS.

The two offenses surged after the break. Brendan Davison earned seven as Andalusia totaled 19 and widened the lead to 46-32. Curry put up eight points for Pleasant Home, while Ty Clark and Jordan Davis both banked threes. Each side had 11 points in the final period with Love and Curry each grabbing six. Anderson had four off a basket and two free throws.

Davison and Love paced AHS with 12 points, and Sigers notched eight in the win. Curry led PHS with 23. Anderson and Clark followed with eight and six points, respectively.

“We came out with great energy, something I haven’t seen from them in a while. We really wanted to just focus on us and continue to build a solid foundation. This season hasn’t gone the way we would have liked, but one thing we have been harping on is to keep pushing and keep working. Things will eventually fall into place. It was a good night for us, and it was good to get these seniors a win on their senior night. They have been through a lot of tough times, but they have continued to work hard no matter the circumstances. I commend them for that. We will get back to work and prepare for Straughn on Friday and Greenville in the area tournament on Tuesday,” Head Coach Marcus Mickles said.

Andalusia (5-8) handed Pleasant Home (14-1) its first loss of the season with a 48-45 overtime win in the B-team game. The Bulldogs rallied from a 45-42 deficit to the Eagles in the final minute.