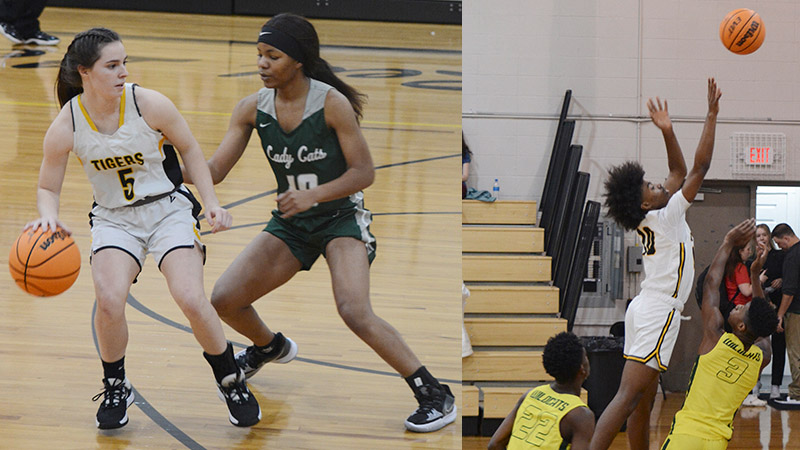 LEFT: Elizabeth Cross, left, runs a play for the Lady Tigers against Kyndra Anthony of the Lady Wildcats. RIGHT: Red Level’s Javen Poindexter, left, drives to the hoop for two of his 39 points against Florala’s Elijah McMeans. (SUBMITTED PHOTOS)

Two Covington County teams battled tooth and nail as Florala and Red Level each won a game in a varsity basketball doubleheader Thursday.

Sharae Coleman collected 10 points, and Kyndra Anthony added eight as the Lady Wildcats roared to a 21-8 lead after one. Ruby Carroll opened the contest with five points for the Lady Tigers. The two offenses were electric with 35 combined points in the second period. Coleman and Anthony matched their totals from the first as Alyssa Thames hit a three. Kaitlyn Beverly banked a pair of shots beyond the arc. Kemariah Crittenden also found the net for RLS, but FHS led 42-22 at halftime.

Coleman tallied eight in the third as Florala scored 15 and allowed four, which stretched the lead to 57-26. Mariah Crowell and Elizabeth Cross each had a field goal for Red Level. The fourth period began with a running clock in effect and allowed both teams to put in younger players. FHS had threes by Anthony, Gracie Howell, and Elizabeth Sanders. RLS received five from Crowell and two from Irannikia Boyd down the stretch.

“We played really hard and have been preaching to set the tone of the game as we approach the postseason. That makes things a lot easier down the stretch, so we emphasize going out trying to set a tone and get a lead at the start. We were able to get a lot of our younger girls some playing time tonight, and I think just about everybody scored. It was an overall good team win,” FHS Head Coach David Bass said.

Javen Poindexter started the contest with a nine-point effort and led the Tigers to a 17-13 lead after eight minutes. Demarcus Johnson added five, and Caleb Padgett knocked down a three. Dalton Jackson had seven for the Wildcats. The net was blistered for 40 points in the second. Elijah McMeans and Jackson combined for 11. Florala also got three apiece from Dontavious Bradberry and Christian Greasham. Poindexter kept sizzling with another nine; Malikye Wright followed with eight. Red Level held a 36-34 lead at the break.

The offenses continued to score at will in the second half. The third saw Poindexter with eight and Johnson with seven as Wright tallied six. Rayshon Coleman led the Wildcats with five in the third. Ronald Johnson chipped in four, while Jonathan Neal swished a three. The Tigers went to the fourth nursing a 53-50 lead. Poindexter and Wright combined for 18 in the final period. McMeans earned seven, while Jackson had four. FHS fell behind by eight and trimmed the gap to one, but RLS held on and took the double-digit win.

Poindexter earned 39 points in the win for Red Level. Wright finished with 19 points as Johnson picked up 16, and Padgett scored five. Jackson paced Florala with 20, and McMeans was next at 17. Coleman collected 11 in the loss as Greasham had eight.

“We didn’t shoot the ball that well, but our defense played a crucial role with the win over Florala. We had some players nursing some injuries, but they came to play. Hopefully over the weekend, they will be able to rest and get ready to play Brantley on the 10th. We have a very competitive area, and any of the five teams could win the area. As coaches, we have to get our players ready to play, and we look forward to the task,” RLS Head Coach Bridges Anderson said.

With the regular season behind them, both teams can now their focus to the postseason, which begins with next week’s area tournaments.