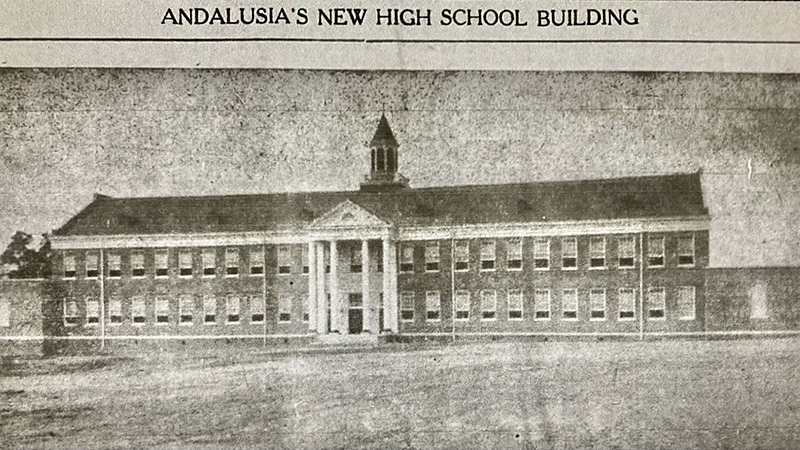 The current Andalusia High School building was built 83 years ago in 1939.

A topic to write this column often pops up when sometimes I am at a complete loss. Today was no exception. On certain occasions, I eat my lunch in our office conference room watching TV talk show host Joe Hagler’s “Good Afternoon, Montgomery.” There was a lively discussion going on with his callers as they talked about the school situation in Montgomery. I have heard Hagler compliment the historic Lanier High School at times concerned always with its future and his desire for its exterior and its architectural beauty to remain the same.

On today’s show, he stated something like this, “In my opinion, the most beautiful school buildings in the state of Alabama are – #1 – Sidney Lanier High School. #2 is Andalusia High School, of course.”

Hagler is married to an Andalusia girl, Katherine Timmerman, and he is a graduate himself of Opp High School. Through the years, he and “his bride” have visited Andalusia on many returns so he has “gotten his eyes full” of the pretty campus and high school building, it is certain.

My topic for this week’s Remember When all of a sudden jumped out at me, and my research began immediately starting with The Andalusia Star in 1939 editions. I knew that the AHS Class of 1940 was the first to graduate from the new school year which probably commenced with the Fall of 1939.

August 31, 1939 – “THE NEW HIGH SCHOOL BUILDING SOON TO BE READY FOR OCCUPANCY – The new high school building is almost completed and is expected to be ready for occupancy when school opens September 11. There is a little finishing work to be done in the interior of the building, all of which will probably be completed within the next few days.”

“As soon as the inside of this building is completed, W. P. A. workers on the Beautification project will begin grading, leveling, and building walks and drives and otherwise beautifying the school grounds. …The school authorities have had many compliments from visitors on architectural design, arrangement, low unit cost of building and artistic color scheme used throughout in painting the classrooms. …All pupils in the Junior and Senior High School grades, seven to twelve inclusive, will attend the new high school. A total enrollment of approximately 1400 children is anticipated during the school year.”

September 14, 1939 – “OUR NEW HIGH SCHOOL BUILDING – Andalusia’s new high school building was thrown open Sunday and hundreds of Andalusia citizens thronged the building to get a first-hand view of the new school, its appointments, its furnishings and conveniences, to take a look at the grounds – and after doing all this to experience a feeling of pride in this modern building which is the last word in high school facilities.”

“The building, with its two stories and a basement, is of brick and concrete and is fireproof. Each room is outfitted with desks, chairs and tables with lockers for each pupil and with radios in each room so that in the matter of discipline and assembly, the movements and activities may be directed automatically.”

“The laboratory, the vocational, home ec., and commercial class rooms are the last word in efficiency in their equipment and appointments. The auditorium is an improvement over anything we have previously seen in a school auditorium and is one in which the acoustics are excellent – a quality that is gratifying to all Andalusians.”

“The building is a credit to any community, and we congratulate the City Fathers, the City Board of Education, and the Superintendent and members of the faculty on their good fortune in having been able to supply such adequate school facilities for the pupils of this area that we can begin the work of the school year with the assurance for the first time in decades that we have school buildings now adequate to meet the demands made by the ever-increasing number of scholastics within this area.”

October 5, 1939 – “ANDALUSIA’S NEW $131,000. HIGH SCHOOL BUILDING – All corridors, stairways, entrances and exits are fire-proof. The building consists of 23 classrooms including science laboratories, commercial department, vocational, home economics, study hall, and library. Joining the main building is a gymnasium-auditorium with a seating capacity of more than a thousand people.”

Most old timers remember that Church Street School was the high school prior to the building of the new 3rd Street AHS building. As the population grew, so did the need for more schools. Thinking of those times, I feel sad for the darling young school boys who only one year later had to join the service or be drafted for World War II. Some of those young men never got to attend the new AHS building because they were killed in the war. Others did come back and went to high school after 1945 but their peers and classmates, mostly females, had completed their time in high school. So a graduate of the Class of 1943 or 44 would have graduated maybe in the Class of 1948 or 49.

A memorial service plaque hangs in the entrance hall at AHS listing the names of the students who served as soldiers in WWII. A star (*) is placed beside the name of each one who died in the war. It is a fitting tribute to honor those students.

The W. P. A. (Works Progress Administration) was a program created by President Roosevelt in 1935. It put approximately 8.5 million Americans to work. According to the November 17, 1938 edition of The Andalusia Star, “The Federal government through the W. P. A. will pay forty-five per cent of the cost of the building and site. The project will occupy approximately 50 workmen and the building is expected to be completed by next school term.”

The site (approximately 40-acre tract), its high altitude, and the fact that it will leave the present high school building to be used for another elementary school building is considered by school officials to be most ideal.

In conclusion, I will tell you readers that Mr. A. Reid Merrill of Andalusia Development Co. told me personally that when the new high school was built, there was a big gulley in the back of the property where eventually the stadium would be built some 10 years later(1950). He stated that during construction, it was discovered that there was a family living in a sort of cave in that gulley. Remember now, this was in the late 1930s at the end of the Great Depression.

Thank you to Joe Hagler for his admiration of the Andalusia High School building which by the way has had continuous updates, remodels, and additions through the years. This thanks is extended from all Andalusians, alumni, teachers, students, school officials, and city officials. It was enlightening to find so much factual information in the newspaper archives and to Remember When. It was delightful to hear Hagler spotlight our “dear old Andy High.”