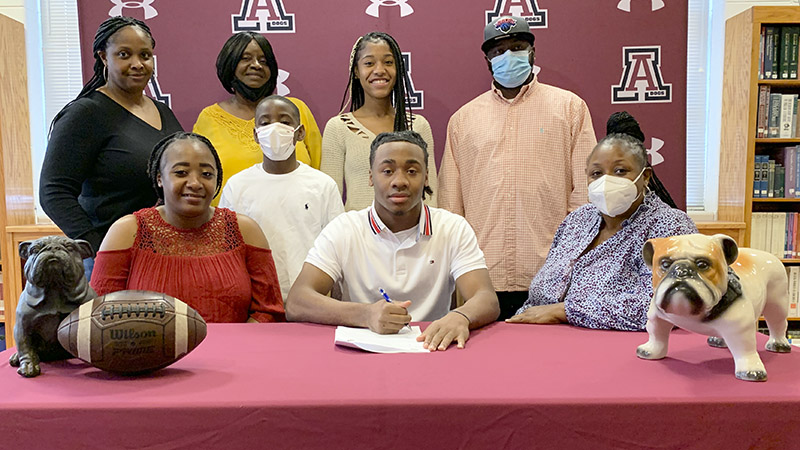 Omare Latimer is one step closer toward a lifelong dream after signing a National Letter of Intent to continue his academic and athletic career at Mississippi College Wednesday.

“I am grateful to continue my football career into college because not too many of my teammates will get this opportunity to be doing what I am doing today. I am really just ready to get to work, develop my game, and still dominate at the next level. I loved how Mississippi College welcomed me, and they are the ones that gave me this opportunity,” Latimer said.

He started playing football at a young age and was influenced by a childhood companion. “I was five years old and actually doing karate first at the time. I had a friend that was also in my karate class, and we were really close. He said he was going to play, so I begged my mom to play. I just feel in love with the game ever since.” 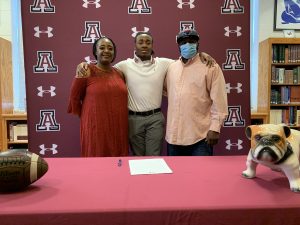 Latimer and his parents, Antonio Latimer and Tambre Gay, are excited about the opportunity of becoming Mississippi College Choctaws.

Mississippi College competes in NCAA Division II as a member of the Gulf South Conference. Having the chance to play college football means a lot to him. “Personally, it’s just another step closer of reaching my dream by trying to make it the pros one day.”

As excited as he is about becoming a Choctaw, Latimer will treasure the time he spent as a Bulldog.

“I will most definitely miss the support here because everyone here in this small town knows everyone well. I learned a lot from my coaches who taught me discipline. That’s something I really harped on in my high school career. I would like to say thank you to Andalusia High School for everything you have done for me and Go Bulldogs,” he said. 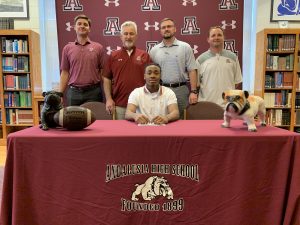 Latimer was appreciative of his football coaches for their help on and off the field. Pictured are, from left, Matt Mellown, Trent Taylor, Jarret Williamson, and Ray Bozeman.

He named two highlights during his high school career at Andalusia High School that stood out. “It was either the dunk on my birthday or the pick six that was the longest interception return in school history.” The dunk was during his junior year on Jan. 29, 2021 in a home basketball contest against Straughn. The pick six occurred when he was a senior on Oct. 22, 2021 in a home football game against region opponent Carroll and covered 99 yards.

“Omare is actually a young man who started for us as a ninth grader, which tells you a whole lot about his athletic ability. Like any ninth grader, there were some things he probably wasn’t ready for, but I think because of the young man he is, he was able to handle those things. He is a man of few words. This year, when things weren’t going the way we wanted to, he was one of several who held everything together. He has played multiple positions and started this year as a wide receiver, corner, and safety doing an outstanding job. We then moved him to running back where he split time with J’Marion Burnette. He made some plays including the 99-yard interception return that spring boarded us and gave us confidence in the playoffs,” Andalusia Head Football Coach Trent Taylor said. 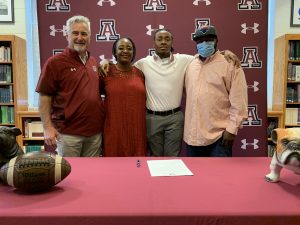 Latimer and his parents thanked Andalusia Head Football Coach Trent Taylor for the time and dedication he offered during football season.

The veteran head coach added that Mississippi College is getting a steal with Latimer.

“It’s my understanding they have intentions to play him on the offensive side of the ball, which he will have no problems with whatsoever. Even at the next level, I feel like he can be a strong safety. Omare is a great example for kids all over our county. He understands that while we can all have goals and aspirations of being at Alabama or Auburn, but the truth is that there are a lot of really great places with great programs. He will do well from an academic standpoint and is so strong. As long as he is being challenged academically, he will pursue his athletic career. He is also a mature young man that might do something else if he doesn’t get that challenge academically. There’s no doubt the future is bright,” Taylor said. 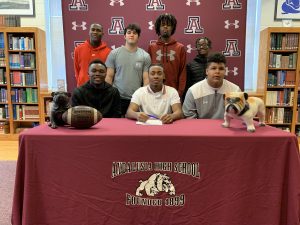 Latimer and his teammates are all smiles on Signing Day.

Having the support of his loved ones means so much to him. “My family kept my head right and didn’t let me get into the wrong crowd. Now, I get this opportunity to get to play at the next level.”

Latimer credited two people for being big influences in his life to this point.

“My mom has been big because of what she’s been through in her lifetime. She never gave up and always had to hustle. I never wanted for anything. I also have a friend that helped me with some mental problems while struggling in school. Because of things like that, I say her as well, too.” 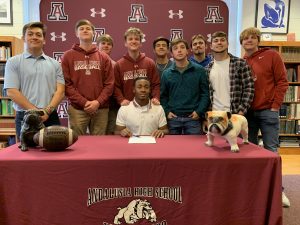 Latimer expressed gratitude for all of his friends who joined him Wednesday as he signed to play college football at Mississippi College.

He is the son of Antonio Latimer and Tambre Gay with two siblings, Kamari Gay and Jaceon Griffin. He will graduate from Andalusia High School on Friday, May 20, 2022.