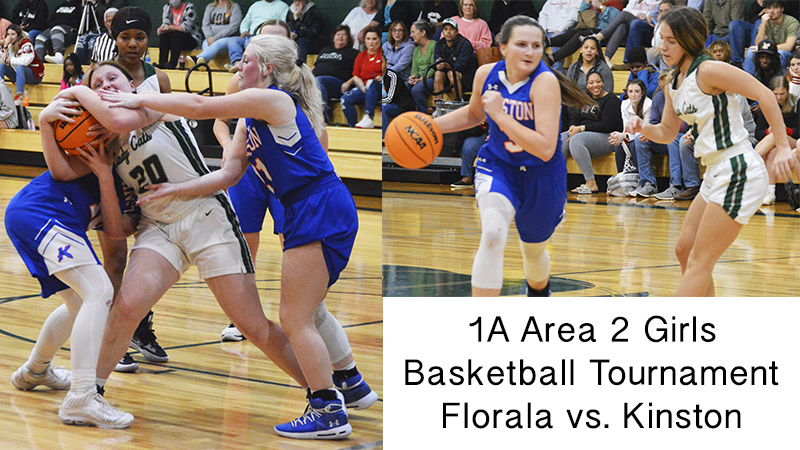 LEFT: Abbi Boldin of the Lady Wildcats fights for control of the ball amongst two Lady Bulldogs. RIGHT: Kinston’s Kelsi Cardwell, left, makes a move down the court against Florala’s Alyssa Thames. (PHOTOS BY ZACK MAIO)

Florala made it rain with a dozen three-pointers and cranked up the offense in a 60-35 win Monday over Kinston in the 1A Area 2 Girls Tournament semi-finals.

“We did a good job of executing in the first half. We shot the ball with confidence, and as I have said before, we have been preaching to set the tone of the game. I think we did a really good job of that. We kind of slowed down in the second half, but all in all, we got a big enough lead to protect it. A lot of kids hit a lot of good shots for us tonight, and now we get ready to face Pleasant Home,” Head Coach David Bass said.

Both teams got off to an explosive start as there were eight combined three-pointers in the first. Sharae Coleman buried two of the eight and started strong with 14 points for the top-seed Lady Wildcats (22-6). Kyndra Anthony also had a pair of long-range shots and scored the other six in the opening period. Kelsi Cardwell dialed up three from downtown to lead the fourth-seeded Lady Bulldogs (6-15) with nine. FHS held a 20-12 lead after one. Coleman tallied eight more in the second including two threes, and Anthony put up seven. Meagan Odom and Alyssa Thames added five each in the period. Cardwell scored eight for KHS as the halftime score was 45-20.

The second half began with a rainmaker from Thames who blitzed the net for 10 in the third. Coleman hit her fifth three as Florala scored 15 points. Cardwell picked up three on a basket and free throw. Liliann Sumblin, Sydney Danford, and Bailey Maddox all earned two for Samson. With the score at 60-29, a running clock was put into effect in the fourth. FHS was held scoreless, while SHS mustered six, all coming from Cardwell.

Coleman paced the Lady Wildcats with 27 points in the win. Thames and Anthony also enjoyed double figures with 15 and 13, respectively. Cardwell was the top scorer for the Lady Bulldogs at 27. The game finished with 18 three-pointers as FHS had 12 and SHS ended with six.

Florala advances to the area championship and faces county rival Pleasant Home on Thursday, Feb. 10 at 6 p.m. Kinston concludes its season with the loss.