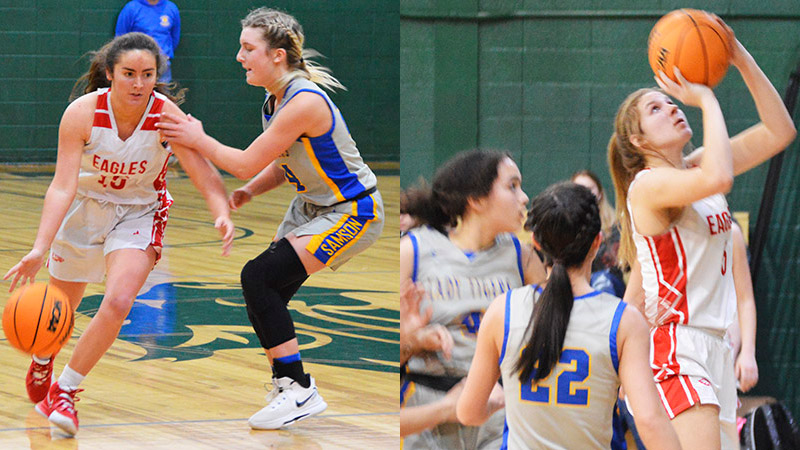 LEFT: Pleasant Home’s Lexi Straughan, left, looks to dribble the ball around Samson’s Shaylei Mock. RIGHT: Amy Garner gets past the Lady Tigers and makes a layup for the Lady Eagles. (PHOTOS BY ZACK MAIO)

The path was not easy, but Pleasant Home found a way and downed Samson 39-29 Monday in the semi-finals of the 1A Area 2 Girls Tournament.

“I thought the girls showed a great deal of resilience tonight throughout the game. It seemed like when Samson would make a run, we would answer back with a run of our own. We made several mental mistakes tonight but made up for it in hustle and grit. We will definitely have to be on our ‘A’ game Thursday when we play Florala when you have the area championship on the line. Everyone wants that home-court advantage, especially this time of year,” Head Coach Tony Wilson said.

The second-seeded Lady Eagles (13-7) built an early six-point lead before the third-seeded Lady Tigers (12-16) rallied back and took a three-point advantage. Amy Garner led PHS with seven points in the opening period as Hailey Ward added six. Brantley Edberg knocked down a trio of three-pointers and led SHS with nine. The two teams battled to a 13-13 tie after eight minutes. The scoring slowed down from both ends in the second. Ward earned an additional four on a pair of field goals. Garner, Lexi Straughan, and Aubrey Pittman each tallied two. Samson went the entire period without a field goal and only received three points from Paige Norris at the free-throw line. Pleasant Home took a 23-16 lead into halftime.

The two teams were pretty much even coming out of the break. Straughan swished a three as Garner, Pittman, and Hope Warthen all added baskets. Edberg returned to form with two more three-pointers. Both sides picked up nine points as the score stood at 32-25 after three periods. The offenses continued to slow down and only combined for 11 points in the final eight minutes. Garner had four as Straughan added three free throws for PHS. Norris and Warthen collected two apiece for SHS.

Garner paced the Lady Eagles with 15 points in the win and was followed by Ward at 10 and Straughan at eight. Edberg led the Lady Tigers with 15 as Norris notched seven in the loss.

Pleasant Home advances to the area championship Thursday, Feb. 10 at 6 p.m. against county rival Florala. Samson sees its season come to an end.