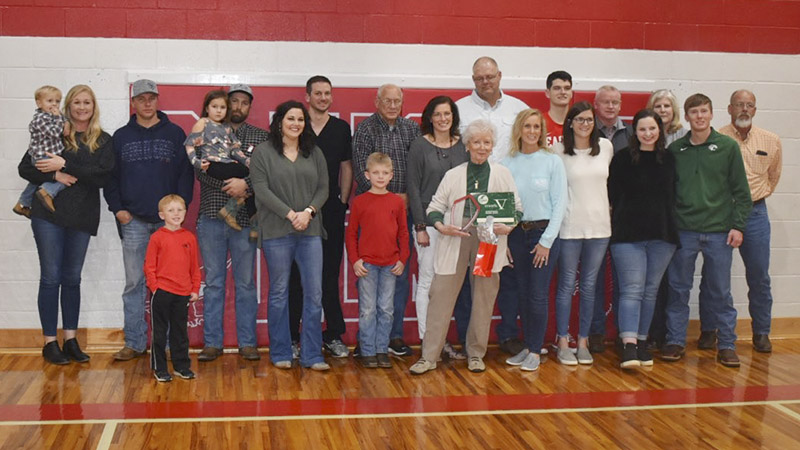 Judy Godwin and her family take a photo at a recognition held in her honor at Pleasant Home School on Friday, Feb. 4. Godwin served as the official bookkeeper for the PHS varsity basketball teams from 1982 until 2022. (PHOTO COURTESY OF ALLIE GARNER)

For 40 years, Judy Godwin served as the official bookkeeper for the Pleasant Home varsity basketball teams, but the time has come to close her scorebook for good.

Godwin began her role as the scorekeeper for the Eagles in 1982 and was recognized Friday, Feb. 4 in the Frank Ray Garner Gymnasium as Pleasant Home hosted Zion Chapel. She is finishing her career in the postseason.

“I was never selected to keep the books and sort of fell into it. A friend was keeping the books, and she quit in 1982 when her first child was born. I had apparently done some substituting for her, so I just took over them full-time. It was always my intention to keep on until my last grandchild at Pleasant Home graduated if my health allowed it. Our last grandchild to attend PHS is a senior this year.”

She grew up in Homer, Louisiana, and attended a school similar in size to Pleasant Home. She said she would the kids from PHS and other area schools. “It has given me the opportunity to get to know so many students I would not have normally met.” 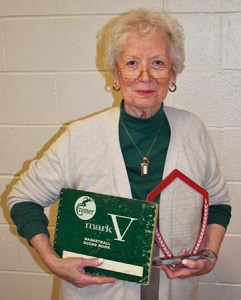 Judy Godwin was recognized at Pleasant Home School on Friday, Feb. 4 for dedicating 40 years of service as the official bookkeeper for the PHS varsity basketball teams.

The importance of focusing on the game and keeping an accurate book is vital.

“Most coaches get so involved in the flow and chaos of the game. They do not keep up with numbers. They depend on the scorekeeper to immediately know how many timeouts left, how many fouls does so and so have on our team or the other, and more. The players also want to know how many points they have. The scorekeeper and the clock keeper are important members of the team. The clock keeper at PHS for the past 15 years has been my daughter Kristi Hildreth. She is also retiring as clock keeper this year,” Godwin said.

She offers some simple but effective advice for the next bookkeeper. “Take your job seriously. It is important to do it correctly. That means pay attention to the game, and don’t let your mind wander over to who is in the stands. It is too easy to miss something, and the school, coaches, players, and student body expect accurate statistics. It is not rocket science, but I have always felt if you take any kind of job, do it right. Besides, it is fun keeping the book and keeps you in the game. If I had not enjoyed it as much, I would not have stayed so long.”

Godwin shared a few games, which stood out to her over her 40-year career.

“In 1993, when our daughter Gabrielle was a senior, we were in postseason play at Millry. It was the last game to win to qualify for state. Gabrielle had the flu with fever and aches, but she scored 41 points. It was her career-high, and we won, but I’m not sure what lesson we learned. I also fondly recall the two years our boys won back-to-back state championships in 2000 and 2001. The other game I remember and would like to forget was a girls’ game played at Troy in postseason play. I forgot the scorer’s table was one step up off the gym floor. When I stepped off, I fell flat on my face in front of a gym full of people. The only thing hurt was my pride. I am sure I embarrassed the team and fans as well as myself. I don’t even remember if we won or lost, but oh well.”

For her, the best part was the athletes she witnessed. “It was great fun to watch the kids play whose parents I had also watched play. Pleasant Home has a rich basketball history. I have no future plans as to PHS bookkeeping unless they need some emergency help at times,” Godwin said.

She was grateful for everyone who gave her the opportunity. 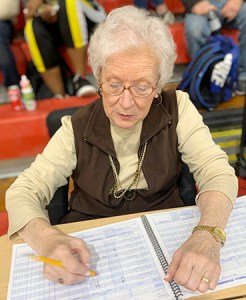 Judy Godwin focuses on the task at hand of keeping the varsity girls’ book in a recent game.

“Thank you to the various administration and coaches who over the years have trusted me to do my job. There were also players over the past 40 years who seemed glad to me at the scorer’s table from year to year. Thanks to all the officials I have met over the years. Most officials in the south Alabama area seem to know me by name now and know I have been here a long time. Many were very encouraging to me as I was asked many times to serve as the ‘official book’ even at away games, especially when the home book was being kept by a student or inexperienced adult. I very much appreciated all their trust. As I said earlier, this job is not rocket science, but an accurate book has often kept down much argumentative behavior during games.”

“Our kids all played basketball, so we were going to all the games anyway. My husband Bill has been very helpful. He has chauffeured our children, grandchildren, other players all over the state, and me, whether it be for a regular-season game or a special tournament. We are a family that loves basketball.”

Although her bookkeeping days at Pleasant Home are ending, Godwin said the family’s basketball journey is not over. “Our granddaughter River Baldwin, a 2019 PHS graduate, plays for the Florida State Seminoles. She has two more years of eligibility after this year, so we will keep the road hot to Tallahassee or to other games within driving distance from home. She graduates this summer but hopes to get her master’s degree as she continues to play.”

Last, but certainly not least, she is very grateful to God.

“He has blessed Bill and me with good health over the years enabling us to continue to do these things. How many other 78-year-old great-grandmothers do you know who are still keeping a high school basketball scorebook? The really great part for me is that the kids do not seem embarrassed to see an old lady there,” Godwin said.