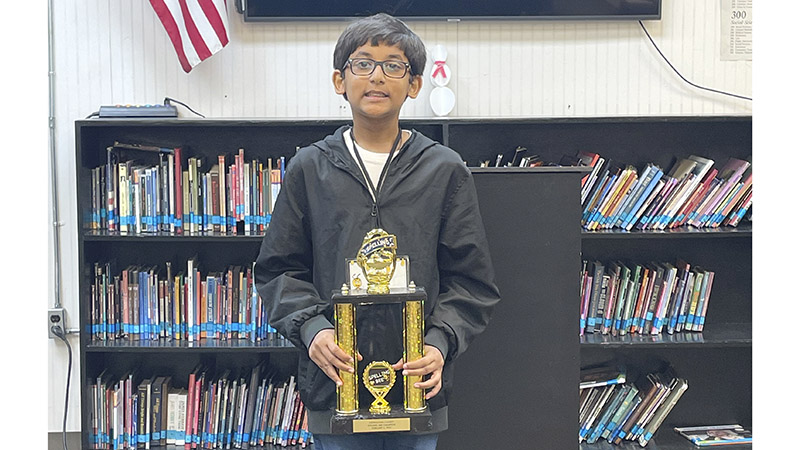 If Dhilan Patel didn’t know what “groats” were beforehand, he does now after spelling the word correctly and winning the 2022 Covington County Spelling Bee on Friday, Feb. 4.

According to the Merriam-Webster Dictionary, the word “groat” is a noun usually plural in form but singular or plural in construction. Its definition reads “hulled grain broken into fragments larger than grits, a grain (as of oats) exclusive of the hull.”

Patel began spelling when he was only four and was named the county’s spelling bee winner one year ago as a student at Straughn Elementary School. He is currently in the sixth grade at Straughn Middle School.

“SMS is an amazing school, and it means everything for me to be able to represent the school I attend and love. I am grateful for this experience because I love what I do, and I aspire to keep advancing in my spelling career,” he said.

While he understands this win is certainly nice to have, he has much bigger goals ahead of him.

“I guess you could say I’ve been preparing since the summertime. I am proud that I’ve won the county spelling bee for the second year in a row, but I know there is more business to attend to.”

Patel’s next step will be to defend his state title at the 2022 Alabama Spelling Bee on Saturday, March 26 at University Hall in Birmingham. The event is scheduled to begin at 11 a.m.

“I am most looking forward to the environment and competition as well as representing Straughn Middle School and Covington County.”

Having the support of his loved ones makes competing in spelling bees each year worthwhile.

“I have a very strong family support system, which I value above all else. I would like to thank my parents and brother because they have constantly helped me excel in spelling since a young age,” Patel said.

With his state win in 2021, he advanced to the quarterfinals of the Scripps National Spelling Bee, where he finished in 59th place out of 209 spellers.

He is the son of Neil and Binita Patel. His older brother Taj is a junior at Straughn High School.

“Straughn Middle School is excited for Dhilan to represent us at the Alabama Spelling Bee competition. I know he will do well because he has a great mentor in his brother, Taj,” Principal Cassandra Anderson said.