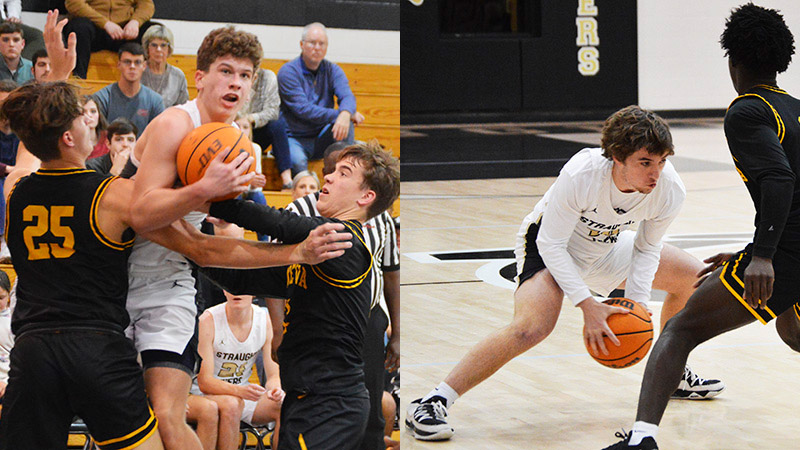 LEFT: Straughn’s Micah Turner, middle, drives to the hoop as Evan Griffin and Talan Johnson defend the play for the Panthers. RIGHT: Jared Hawkins, left, runs the next offensive play for SHS against a GHS defender.

Straughn overcame a late seven-point deficit and escaped with an intense 38-34 win over upset-minded Geneva in the 4A Area 2 Boys Tournament semi-finals Tuesday. 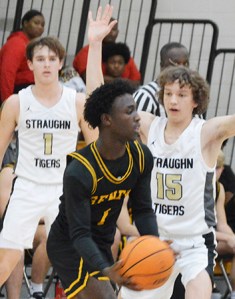 Geneva’s Timothy McReynolds, left, looks for an open man as he is carefully guarded by Straughn’s Taylor Sikes.

“Tonight was a fulfillment of years of hard work these young men have put in. We had a goal of hosting area and did that. We also wanted to find ourselves in the championship and here we are. God has worked through this team in so many ways and has answered countless prayers I have had for them. I am very proud of these guys and thankful to the fans who showed up to support them. I am so thankful I have the opportunity to coach the best kids, but we turn our attention to Dale County now,” Head Coach Trevor Driver said.

Abram Guilford gave the top-seeded Tigers (17-11) an early 6-4 lead and finished with nine points in the first. Noah Johnson garnered seven as the fourth-seeded Panthers (10-16) led 11-10 after one. Daniel Bell put SHS ahead 12-11 with six minutes left in the half and earned all five points in the second. GHS retook the lead and used a buzzer-beater for a 19-15 halftime lead. Johnson had four as Timothy McReynolds and Evan Griffin each earned two. 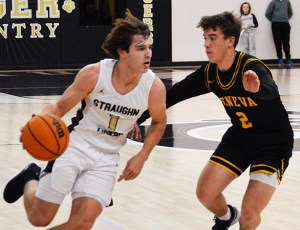 Abram Guilford, left, works his way down the floor as Talan Johnson looks to make a defensive stop.

Geneva started the second half with a three and stretched the lead to 22-15. The game slowed down as the game stalled for a few minutes. Guilford made a layup as Micah Turner added a free throw for Straughn. Avery Perry stroked a trifecta, and Griffin notched a basket to make the score 24-18 after three. That set up a wild fourth period with the offenses lighting up the scoreboard for 30 combined points. 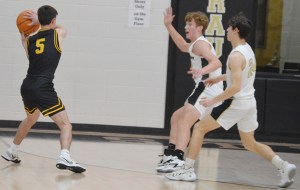 John Brannon, left, prepares to make a pass and is defended by Daniel Bell and Riley Brooks.

GHS pushed its lead out to 29-22 with a dunk from Griffin. Bell trimmed the deficit to 29-28 with a clutch three and had seven points in the fourth. Guilford buried a deep three for a 31-31 tie with 2:50 left and earned five of the team’s 20 points. Turner and Bell pushed SHS to a 36-31 lead with five free consecutive free throws. Talan Johnson followed with a three and drew the Panthers within two at 36-34. The Tigers held on when a game-tying three with five seconds left missed the mark. 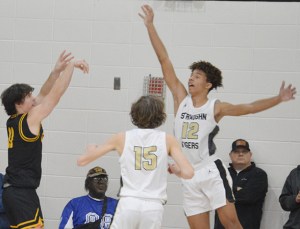 Avery Perry, left, fires a three-point attempt for Geneva as Parker Black and Taylor Sikes of Straughn defend the shot.

Guilford led Straughn with 16 points in the win. Bell finished with 12, and Turner was next at 10. Johnson paced Geneva with 16, while Perry and Griffin earned six points each. GHS finished 7-of-8 at the line, and SHS finished 13-of-18.

The Tigers advance to the area championship game Friday, Feb. 11 at 6 p.m. against second-seed Dale County. The narrow defeat eliminates the Panthers from the postseason.