Remember When: The Henry Opp story 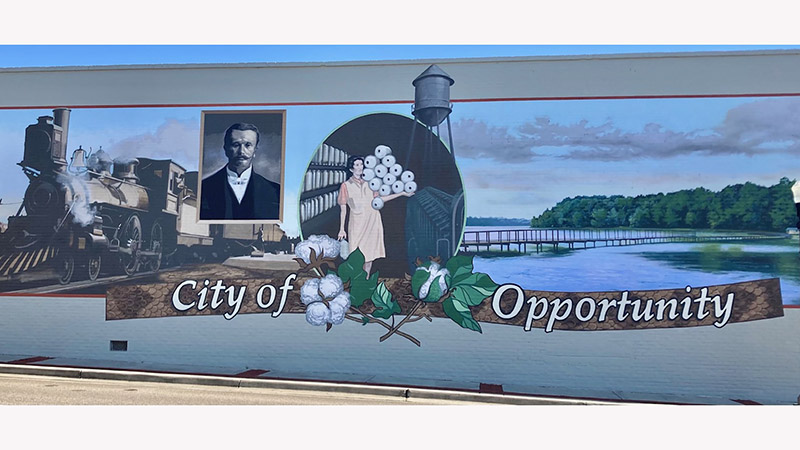 A mural featuring the image of Henry Opp.

In researching and learning about the history of Covington County, it is interesting to discover that another village in the county was named after a man serving as the mayor of the county seat, Andalusia. That mayor who was serving as Andalusia’s mayor from September 1899 – 1906 was Henry Opp.

Henry Opp was born in Lowndes County, Alabama in 1859. He was the oldest child of five sons and two daughters. His parents, Valentine and Catherine Hart Opp, were natives of Germany and Ireland and had immigrated to the United States around 1850 and were married in Lowndes County in 1858.

Henry Opp studied law under John Dunbibin “Bibb” Gardner of Troy, Alabama in the early 1880s and around 1890, he married Gardner’s oldest daughter Addie Belle Gardner who was born in Troy in 1867. The Gardners were pioneer residents of Troy. “Bibb” Gardner, her father, was instrumental in establishing Troy State Teachers College and was the first president of the Board of Trustees.

They moved to Andalusia in the early 1890s and purchased the old John R. Salter home site and all of the land in the forty between the present Dunson and Church Streets and west of Opp Avenue. Opp constructed a large house in the northeast corner of Church Street and the present Opp Avenue where he and his wife lived for the remainder of his life.

In the early 1890s, Attorney Henry Opp represented the Central of Georgia and the Mobile and Girard Railroad companies in a dispute with the L & N. The land grant suit was settled in 1893.

When the L & N Railroad decided to extend their tracks from Georgiana to Gallagher, Florida, a new subsidiary named the Alabama and Florida Railroad Co. was created with E. L. More, president, and Henry Opp as the principal lawyer. The train line passed through the area and the depot was named Opp in appreciation of Henry Opp’s efforts in representing the L & N.

In 1901, the Alabama General Assembly incorporated the Town of Opp. The post office was moved from Hallton (a little north of Opp) to the railroad station, and a railroad camp with workers made up the first population of Opp. Soon there were several stores and a saloon. An early newspaper clipping gives the population as twenty-one. Soon homes were built as well as other wooden stores all facing the railroad track.

Before long a hotel was built. A cotton gin, livery and feed stables, a boarding house, a drug store, a doctor’s office appeared as well as banks, churches, a silent movie theatre for entertainment along with hat trimmers and stores for the ladies. By 1921 when Opp’s first cotton mill was established, there were many young men and women who came to the promising town to seek a livelihood.

It is still remembered today that prominent attorney Henry Opp was influential in bringing the L & N Railroad to the city named for him. A magnificent history mural is displayed on Main Street in Opp with a picture of Attorney and Mayor Opp.

During his term, Mayor Henry Opp of Andalusia devoted much attention to developing the town of Andalusia. After the trains arrived in 1899, the population soon tripled and most of the brick buildings located on Court Square were constructed.

Henry Opp died in 1921 leaving a large estate making him one of the weathiest persons in Covington County. Most of the estate went to his widow, Addie Belle Gardner Opp, who married Herbert (Conecuh County) native Hill Guy a year and a half later.

According to careful research by historian Wiley Ward, J. H. Guy and J. G. Scherf purchased all the outstanding stock in Andala. When the Alabama Textile Products Corp. was incorporated in 1929, Addie Belle and J. H. Guy invested heavily in that corporation, and J. H. Guy became a board member.

Ward states, “It can be seen that the Andala Co. and the Alabama Textile Corp. would have never come into existence without money from the Henry Opp’s estate.”

Ward’s published article in 2014 is headlined as follows: “WITHOUT OPP’S MONEY, NO ANDALA OR ALATEX.”

The story of Addie Belle Gardner Opp Guy, known in a 1956 edition of The Andalusia Star as Andalusia’s “Grand Dame,” is another colorful story in itself especially remembered by Andalusians of the 1940s, 1950s, and 1960s.

She passed away in 1965 and is buried in Magnolia Cemetery beside her first husband Henry Opp. J. H. (Jesse Hillary “Hill”) Guy passed away in May 1959. He was named in his obituary as the “first president of the Andala Company at the time of the formation of that company in 1923, a post he held until his death. He also served as a director of the Alabama Textile Products Corporation.” He was buried in the Andalusia Memorial Cemetery.

The late Harold (Hal) Lynch who served as president of the Opp Historical Society shared some information about Mr. Opp. It is a little different than other stories.

“When he lived in the Ruhr Valley in Germany, his name was Oppenheimer. When he immigrated to this country, he was already a lawyer, and he shortened his name to Opp. He was advised to go south where there were more opportunities than in New York. He went first to Louisville, Kentucky and got a job as an attorney with the L & N Railroad who wanted to bring the railroad down to the deep south. When Opp ended up being instrumental in bringing the train into Opp, the people were all so pleased. He stood on the back of a train and made a little speech. They all clapped. Someone yelled out, ‘Let’s name the town after Opp!’ Others joined his cry, and thus a town was named.”

Lynch concluded his story by saying, “Henry Opp was in doubt about the Bible and Heaven and never belonged to a church, but on his deathbed, he looked up at his wife and said, ‘You know, it may all be true,’ and with that closed his eyes and died.

Henry Opp was outstanding in many ways and is definitely a part of Covington County’s history with various stories that still surface. Wouldn’t it be remarkable if any of us living today were remembered and written about 100 years from now?