Florala hangs on for area title over Pleasant Home 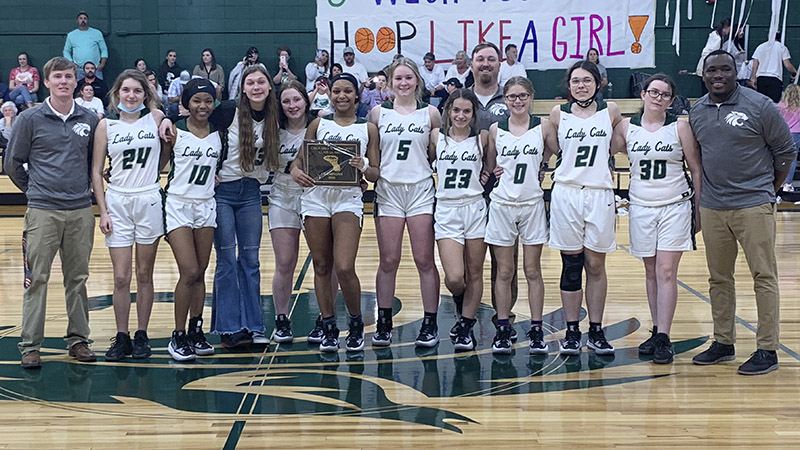 The Lady Wildcats celebrate after claiming the 1A Area 2 trophy.

In a tight game that saw the lead change hands numerous times, Florala held serve with a 55-50 win in the 1A Area 2 Girls Championship on Thursday. 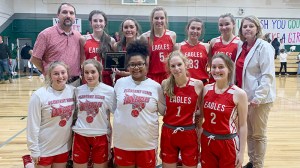 The Pleasant Home Lady Eagles will advance to the next round of the state playoffs in the Class
1A South Sub-Regional after coming in as the runner-up at the 1A Area 2 tournament. Pleasant
Home will take an overall record of 13-8 into the next round at the winner of the 1A Area 3 tour-
nament, which concludes at 5:30 p.m. Saturday, Feb. 12, in Georgiana.

The second-seed Lady Eagles (13-8) took an early 5-2 lead before back-to-back drives to the hoop by Sharae Coleman. She finished with seven points in the first period and made a free throw that tied the score at 7-7. Hailey Ward led with four points to start, and Lexi Straughan added a three. The top-seed Lady Wildcats (23-6) used the momentum to begin the second on an 11-0 run. Coleman scored the initial eight of the frame before Alyssa Thames drilled a three to make the score 18-7. Straughan hit a free throw with 4:45 left until the break, but Thames had another three. FHS took its largest lead of the first half at 21-8 until PHS closed on a hot stretch. Straughan had six points, while Amy Garner, Hope Warthen, and Ward each added two. Coleman tallied 10 more as Kyndra Anthony picked up a basket to give Florala a 25-19 lead over Pleasant Home at halftime.

PHS started the second half strong and cut the deficit down to one at 25-24. Coleman blistered a three to push the margin to 28-24, but the momentum swung back the other way. Straughan tied the score at 28-28 with her only two points of the third, and Garner made a layup for a 30-28 advantage. Ward pushed the lead to 34-30 with a long-range three and scored 10 in the period. FHS retook a brief 35-34 lead on a three-point play by Coleman but trailed 36-35 going to the fourth.

Thames opened with her third trifecta, and Anthony swished three free throws to give Florala a 41-36 lead. Coleman widened the gap to 44-37 with two shots from the line and tallied 10 in the final eight minutes. Pleasant Home once again fought back to a one-point deficit at 44-43. Garner had eight points in the period, and Straughan chipped in three before the senior duo fouled out. The Wildcats were able to maintain the lead with clutch free throws down the stretch, as the Eagles got no closer than two points.

Ward led PHS with 19 points in the loss. Garner and Straughan were next at 14 points apiece. Coleman paced FHS with 35 points in the win. Anthony and Thames both had nine. Meagan Odom rounded out the scorers with two.

Both teams advance to the sub-regional round Monday, Feb. 14. As the area champion, Florala will host the Area 3 runner-up. Pleasant Home will travel to the Area 3 winner. Georgiana and Red Level play for the Area 3 Championship on Saturday, Feb. 11.