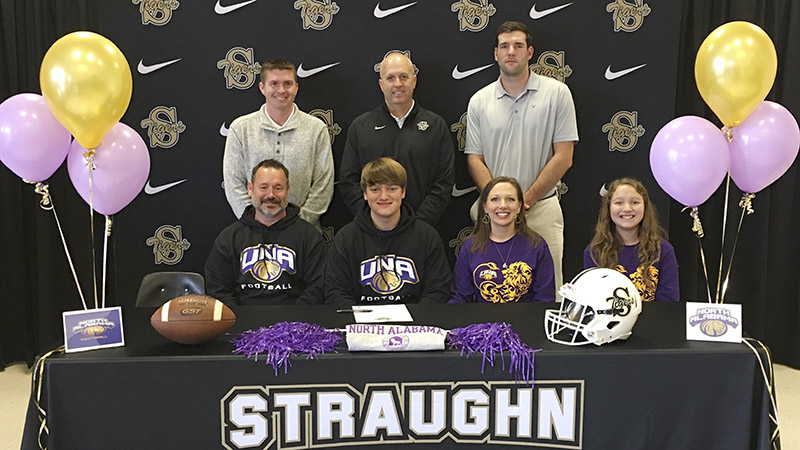 Evan Godwin has put in a lot of hard work and looks forward to continuing his football journey after he signed with the University of North Alabama Wednesday, Feb. 2.

Godwin will keep his pride within the cat family going from being a Straughn High School Tiger to a UNA Lion. 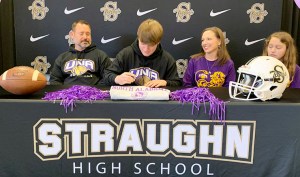 Evan Godwin prepares to sign his Letter of Intent with the University of North Alabama to play football with his family.

“I’m grateful about this opportunity at the next level because I love the game of football and the competitiveness that comes with it. I am really looking forward to playing for a Division I school. I was also very impressed with the beautiful campus and am excited to work with the coaches and players. When I went on my visit to Florence, it felt like home to me,” Godwin said.

The University of North Alabama is distinguished nationally as the only team to win three consecutive football national championships at the NCAA’s Division II level. Recently, UNA transitioned to the Division I-FCS level, where it now competes as a member of the Big South Conference. “It has always been a goal of mine to play football at the next level, and I thank God for this opportunity.” 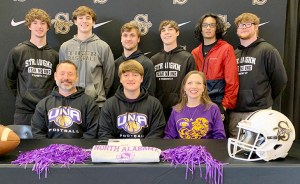 Evan Godwin looks forward to becoming a UNA Lion and shares the moment with his parents and his Straughn Tiger football senior teammates.

Godwin loved watching football at an early age and decided to start playing when he was in the second grade. While a member of the Tigers, he played several positions most notably as the long snapper and center. He also served as left tackle and on the defensive line.

Although he is pursuing his dream to play college football, high school will always be something he treasures.

“Straughn will always be my first home. I grew up with my teammates and played numerous games with them through the years. I will definitely miss them the most. We had a great coaching staff this year, and I learned many valuable lessons. Coach (Ashley) Kilcrease was an encourager and taught me how to build my teammates up. Coach (David) Lowery taught me how to stay calm under pressure. Coach (Andrew) Lowery was an outstanding offensive line coach and taught me the importance of leadership. I wish I could have played under them for more than one year,” Godwin said. 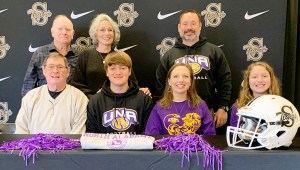 Godwin enjoys his Signing Day on Wednesday, Feb. 2 at Straughn High School with his parents, sister, and grandparents.

He added that his biggest highlight and most successful time came in the 2021 season. “My senior season was full of many highlights. The three-game winning streak against Booker T. Washington, Alabama Christian, and Dale County secured us a home playoff game. That would have to be the highlight of the year for me.”

Having the support he has received throughout the years means the world to Godwin.

“I am thankful that God gave me such a loving and supportive family. They have stood by me through the years and are excited to be part of my new adventure. My family and friends have always been my biggest inspiration. They always push me to work hard and be my very best.” 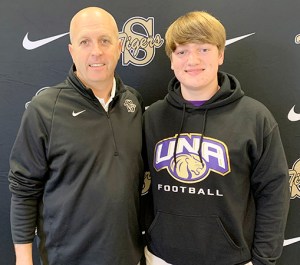 Straughn Head Football Coach Ashley Kilcrease, left, congratulates Godwin on his signing with the University of North Alabama and thanks him for the hard work and dedication he gave to the Straughn Tiger football program.

He is the son of David and Wendy Godwin with two siblings, Andrew Hartzog and Anna Claire Godwin. He will graduate from Straughn High School on Friday, May 27, 2022.

“I would like to wish continued success to Coach Kilcrease and the team next year. I send best wishes to my friends who are also graduating and beginning their own journey. As 2 Timothy 1:7 says, ‘Fear no one.’ and Roar Lions,” he said.