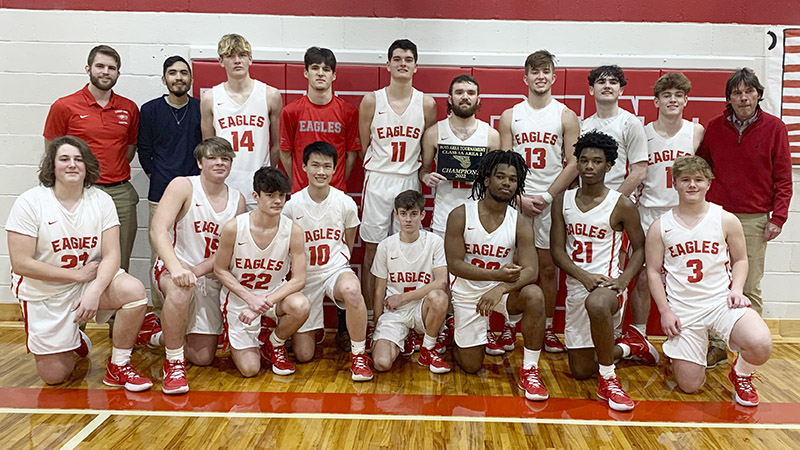 The Pleasant Home Eagles won the 1A Area 2 Championship over the Florala Wildcats on Friday, Feb. 11.

The rubber match between two county rivals saw Pleasant Home pull away in the second half for a 67-47 win over Florala in the 1A Area 2 Championship game Friday.

The second-seed Wildcats (15-12) scored first before Mason Anderson knocked down a three for the top-seed Eagles (13-8). Dillan Purifoy started the night on fire with nine points, all from long-range, in the opening period for Pleasant Home. Kennith Dalton Jackson was also on point and delivered three baskets to help Florala to a 12-11 lead. Action stayed close in the second as both sides traded the lead on a couple of occasions. Rayshon Coleman had seven points including two three-pointers as FHS took a 20-19 lead. Purifoy remained on fire and added three more big shots beyond the arc. With the score tied at 22-22, PHS went on a 7-1 run to close the half and took a 29-23 lead at halftime.

Pleasant Home used another big period after the break and continued its strong defensive effort to build a 48-33 lead. Ethan Curry notched eight points in the third, while Purifoy hit two more threes. Anderson ended the period with a three-point play and rounded out the scoring with five. Coleman picked up six for Florala, and Elijah McMeans knocked down a three. The Wildcats started the fourth with a three from Coleman, who had seven in the final frame. The Eagles continued their offensive onslaught. Jordan Davis knocked down a pair of threes in the final frame. Anderson and Curry tacked on four more points, and Luke Gatewood picked up a three. Dontavius Bradberry also found the net on two baskets.

Purifoy finished with 24 points to lead all scorers in the win. Anderson was next for PHS with 17 and followed by Curry at 16. Coleman paced FHS with 22 in the loss, and Jackson chipped in 10 points.

Both teams advance to the sub-regional round scheduled for Tuesday, Feb. 15 at 6 p.m.