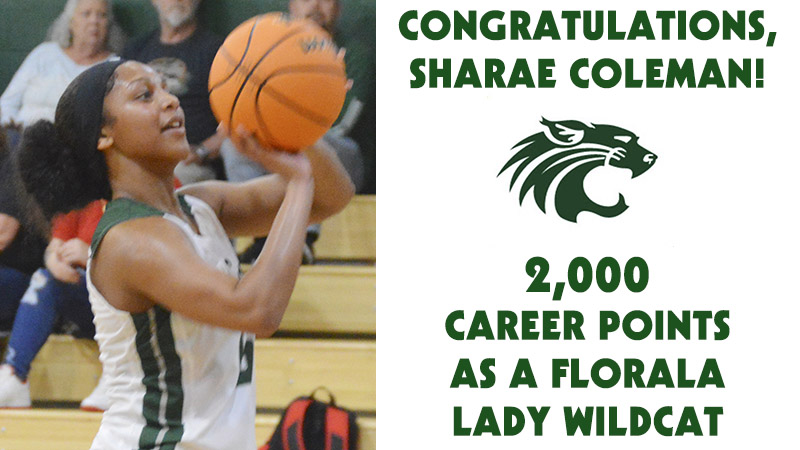 With their basketball seasons hanging in the balance, Florala escaped with a 42-39 home win over Red Level in a 1A girls’ sub-regional game Monday.

“It was a big win for both our school and community. It’s been 18 years since our school made a Sweet 16 appearance, and we’re really excited. It was a battle for our girls early on, but we came out and set the tone we have been preaching to them. Red Level has a really good team, and I thought they brought their A-game. We had a battle with them but overcame adversity to come out with the win,” said FHS Coach David Bass.

Both teams started the contest with double-digit showings. Mariah Crowell grabbed six points for the Lady Tigers (17-11), and Kaitlyn Beverly sank three free throws in the opening period. Sharae Coleman notched 11 points, and Kyndra Anthony knocked down a three as the Lady Wildcats (24-6) took a 14-11 lead after one. The second period was not kind to RLS, who mustered only two points from Ruby Carroll. Coleman continued to shine on offense with nine more points in the frame. Meagan Odom, Abbi Boldin, and Anthony each scored a basket and propelled FHS to a 29-13 lead at the break.

Beverly hit a three and earned five points in the third. Elizabeth Cross, Crowell, and Carroll chipped in two apiece as Red Level rallied back and cut the deficit to 33-24. Anthony had a pair of field goals for Florala. That set up a decisive fourth as both sides fought to keep their seasons alive. Carroll finished with eight in the final period for the Lady Tigers and was followed by Aliyah Robertson at three. Coleman scored nine points down the stretch and eclipsed 2,000 career points for the Lady Wildcats in the win.

“I’ve been working really hard to get there, and whenever Coach Bass told me I was only 70 something points away, I was ready. When I hit the basket, I wanted to cry because the game was so close, but we celebrated afterwards,” Coleman said.

Carroll paced RLS in the setback with 14 points as Crowell and Beverly also earned double figures at 10. Coleman led the charge for FHS with 29 points, while Anthony tallied nine points in the win.

“We ended our season with a tough defeat against Florala tonight. Our ladies fought hard and played their best. We had a good season, and my appreciation goes out to the coaches, managers, fans, administrators, and players. We look forward to summer conditions and to another great year during the 2022-2023 season. Thank you all for your continued support and Go Tigers,” said RLS Coach Bridges Anderson.

Florala advances to the Southeast Regional at Garrett Coliseum in Montgomery and faces Loachapoka on Saturday, Feb. 19.