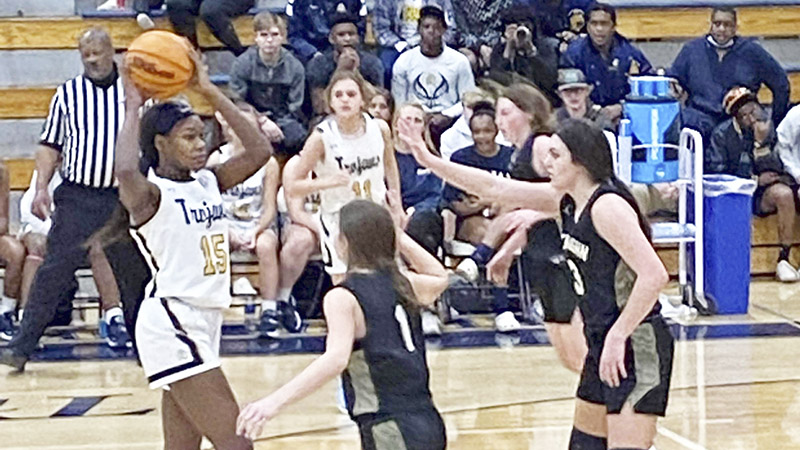 Danielle Greene, left, looks to pass the ball as Presley Bates and Bryleigh McBride defend the play in Straughn’s 4A sub-regional game at Saint James in Montgomery. (PHOTO BY JENNIFER SANDERS)

Pleasant Home concluded its girls’ basketball season with a 59-40 road loss to Georgiana in a 1A sub-regional game Monday.

“I was extremely pleased with how hard the girls played tonight. It was a very physical game on both ends of the floor. Our girls never gave up and battled hard all night long. We made too many mental mistakes and allowed Georgiana too many opportunities on the offensive side of the ball. I am just proud that we had the opportunity to be playing again and that we are laying another layer of foundation of postseason play for future generations to follow,” PHS Head Coach Tony Wilson said.

The two squads played to a 10-10 tie at the end of one. Hailey Ward swished a three as Amy Garner, Lexi Straughan, and Hope Warthen each grabbed two points for the Lady Eagles (13-9). Angel Haynes led the Lady Panthers (16-8) with seven in the opening period and was followed by Teaira Bonham at three. Aubrey Pittman, Garner, and Warthen scored two apiece for PHS in the second. Lillie Boggan, Alexea Bass, and Haynes combined for 16 points in the period as GHS took a 29-16 halftime lead.

Straughan and Pittman both collected four, while Garner earned three for Pleasant Home right after the break. Boggan drained a pair of threes and had eight points in the third to lead Georgiana. Zykeria McClain and Haynes both collected five points as the lead grew to 49-27. Garner notched eight points in the final period as Straughan and Pittman took two for the Lady Eagles. Nyeashia Thomas led the Lady Panthers down the stretch with six points, and Boggan chipped in four.

Garner led PHS with 15 points as Straughan and Pittman both earned eight in the loss. Haynes paced GHS with 18 points and was followed by Boggan at 17. McClain and Thomas scored eight apiece.

Georgiana moves on to the Southeast Regional at Garrett Coliseum in Montgomery for a matchup with Talladega County Central on Saturday, Feb. 19.