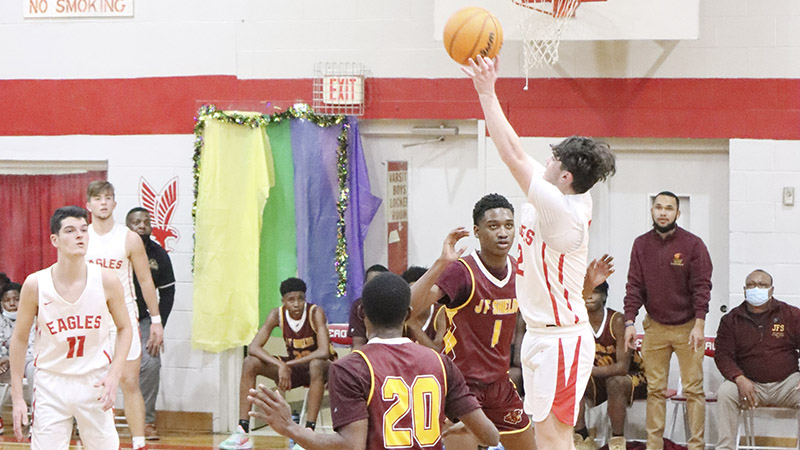 Mason Anderson fires a three-pointer for the Eagles in between two Panther defenders. (PHOTO BY TINA BOLES)

Pleasant Home trailed by 13 points early and could not catch up in a 64-37 loss to J.F. Shields in a 1A sub-regional Tuesday.

Mason Anderson and Luke Gatewood each scored a basket for the Eagles (13-9) in the first period. Kendarius Walker started with seven points, and Jarviuntae Hale followed with four to give the Panthers (14-10) a 17-4 lead after eight minutes. Anderson tacked on seven more for Pleasant Home in the second, while Jordan Davis buried a three. Aumori Armour hit a pair of field goals as Alexavier Moton and Jamorris Marshall each added three. J.F. Shields increased its lead to 33-14 at the intermission. 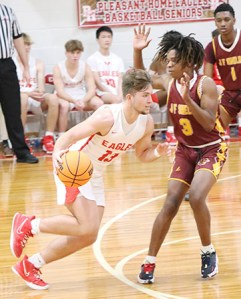 Pleasant Home’s Ethan Curry, left, makes a move down the floor as Alexavier Moton guards the play for J.F. Shields.

Anderson continued to spark the offense with six after halftime. Ethan Curry and Gatewood notched two apiece for another 10-point period by PHS. Walker led JFSHS with five in the third. Calvin Freeman and Hale both scored four as the margin swelled to 49-24 with eight minutes remaining. Curry earned seven in the final period for the Eagles as Ty Clark sank a three. Hunter Baldwin got in the scoring column with a free throw. Armour led the Panthers with seven down the stretch.

Anderson paced Pleasant Home with 15 points. Curry notched nine as Gatewood earned six in the loss. Walker and Armour each had 14 to lead J.F. Shields. Hale and Freeman also finished in double figures with 11 and 10 points, respectively.