Tigers fall by three in sub-regional against Saint James 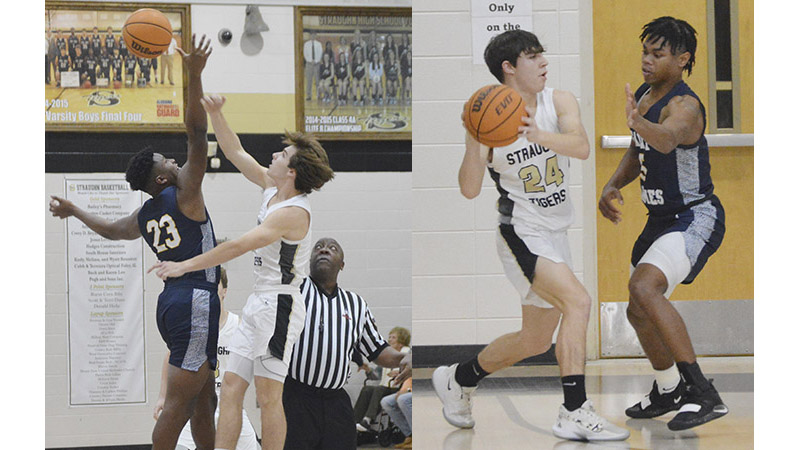 LEFT: Saint James’ KJ Jackson, left, and Straughn’s Abram Guilford square off during the opening tip of a 4A sub-regional basketball contest. RIGHT: Riley Brooks looks for an open Tiger teammate as Bradley Thomas plays defense for the Trojans. (PHOTOS BY ZACK MAIO)

Despite a strong defensive e­ffort, missed shots proved decisive as Straughn ended basketball season with a 27-24 loss to Saint James in a 4A boys’ sub-regional Tuesday.

SHS made its deepest run since the 2014-2015 season and eliminated STJ in the regional title game that year. The 66-52 win led to the Final Four in Birmingham.

“These young men have accomplished so much this season. I am so proud of them and cannot ask for anything more from them at any point this year. These five seniors have built an amazing foundation for future Straughn teams as well as an expectation for success down the road,” Head Coach Trevor Driver said. 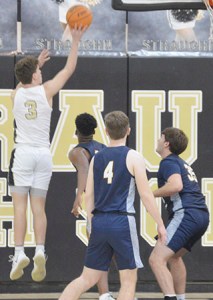 Micah Turner makes a move to the basket as three Trojans play defense.

It was a sluggish start from both squads as neither side could convert a field goal. The Tigers (18-12) finally drew first blood when Parker Black found the bottom of the net with 1:58 left in the opening period. Matt Middleton tied the score with 42 seconds, and the score remained 2-2 after one. The Trojans (15-7) took their first lead early in the second until Abram Guilford evened the score at 4-4 and banked a jumper giving SHS a 7-6 lead. Jake Yohn responded with a three and coupled with four points by KJ Jackson, STJ took an 11-7 lead at halftime. 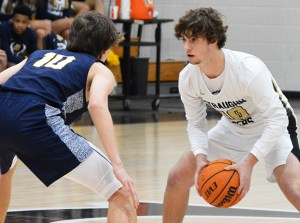 Saint James’ Matt Middleton, left, keeps a close eye on Straughn’s Jared Hawkins during a play in a 4A sub-regional game at SHS.

Daniel Bell began the second half with a bucket, and Guilford followed suit to draw Straughn even at 11-11. Bradley Thomas scored the only two for Saint James in the third. Micah Turner then crafted a nifty move to the hoop for two. Bell gave SHS a 16-13 lead from downtown with eight minutes to go. Ethan Beard and Yohn knocked down back-to-back three-pointers for STJ, who never trailed again. Bell scored another basket, and Guilford swished two free throws to trim the deficit to 23-22. Jackson scored four more down the stretch. After the Trojans forced a turnover and pushed their lead to 27-22, Taylor Sikes earned an offensive rebound and scored the final basket for the Tigers.

Guilford paced all scorers with nine points, and Bell was next with seven for Straughn. Turner ended the contest with four, while Black and Sikes collected two apiece. Jackson collected eight points for Saint James. Yohn and Thomas took six each in the win.