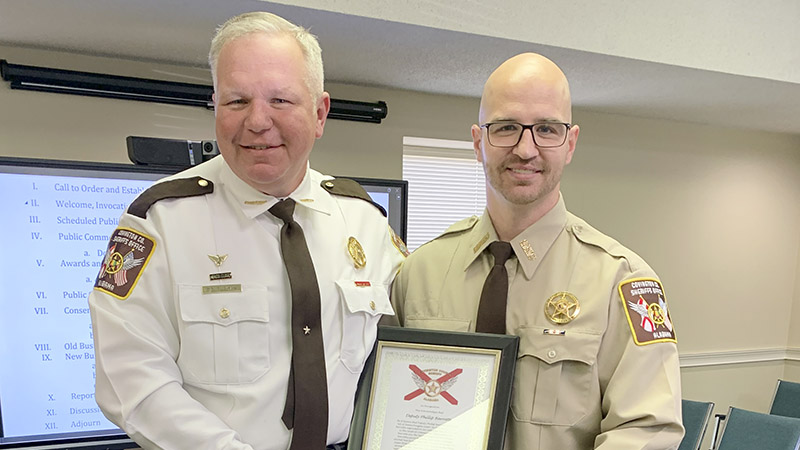 Covington County Sheriff’s Deputy Phillip Barrette risked his own life by saving a local citizen in a structure fire and was recognized for those efforts by Sheriff Blake Turman.

Barrette was on patrol during the early morning hours of Wednesday, Feb. 2 when he received an emergency call on his radio. Thanks to his quick thinking, Barrette was honored with the Covington County Sheriff’s lifesaving award.

“When I received the call about an unknown fire that was close to the gas station, I knew I needed to hurry to it just in case it was something else. As I got closer, I saw there was a house on fire to my right. I immediately jumped into action and knew I had to see how bad it was in order for me to call it in. I also knew I had to rush to get into the house and see if anyone was in there. My safety never crossed my mind because I couldn’t let anything happen to anyone in the house. I would do it for anyone either on or off duty. It’s what I am supposed to do. I love helping people and just want to make a difference in the lives of our citizens,” Barrette said.

Sheriff Turman was honored to recognize one of his own for a selfless act of bravery.

“All police officers look for those moments in their career, and this young deputy found that moment by taking on this call. He responded to the town of Sanford where a fire was reported coming from a trailer or possible storage shed. As Deputy Barrette approached the area, he quickly recognized the residence of James Douglas Sasser was on fire at approximately 1 a.m. He knocked on the door, and unbeknownst to Phillip, Mr. Sasser was in there asleep. He made entry into the house and aroused Mr. Sasser from his sleep. Deputy Barrette removed Mr. Sasser from his home and saved his life but was also able to remove valuable property from the home. He put his life on the line for someone he didn’t even know and deserves to be recognized. I cannot be any prouder of this young officer,” Turman said.

Originally from Geneva, he called Opp home for several years. He moved to Andalusia two years ago. He is the son of Skip and Sherree Barrette with three siblings: Bo Barrette, Johnathan Barrette, and Jennifer Likens.

Barrette has served as a deputy with the Covington County Sheriff’s Department since Nov. 1, 2021. He was a reserve deputy for a few years prior to attending Jefferson County Sheriff’s Academy in Fultondale, Alabama, where he graduated on Dec. 4, 2021.