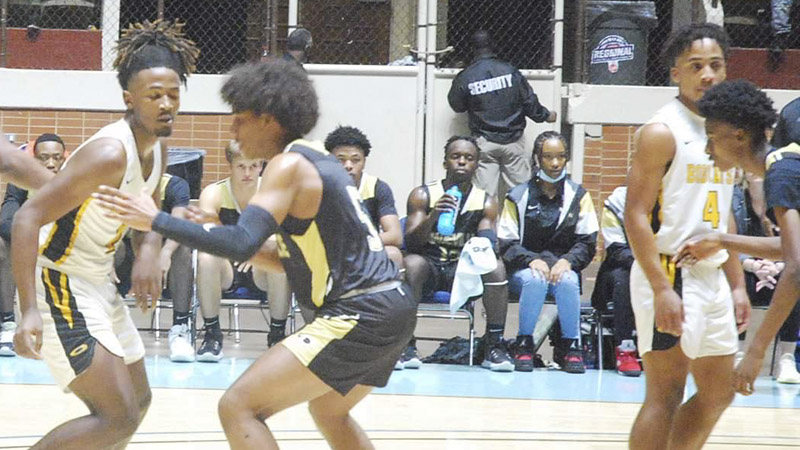 Opp's boys gave a strong effort but came up short to Dadeville in the 3A Southeast Regional semifinals Thursday night. (PHOTO BY TRIPP NORRIS)

Opp struggled in the second period and ended a historic basketball season with a 61-48 loss to Dadeville in the 3A Southeast Regional at Garrett Coliseum in Montgomery Thursday.

The season was highlighted by the school’s fourth straight area title and twentieth consecutive area win, a school record for most wins in a single season with 20, and a season sweep of rival Andalusia, which made it four consecutive wins over the Bulldogs. 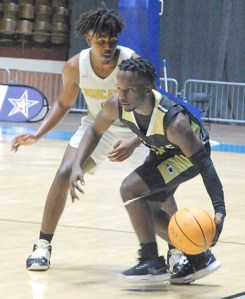 Jabarri Hill guards a Dadeville defender during the Bobcats’ Sweet 16 game against Dadeville at the Garrett Coliseum in Montgomery.

“We had a good start to the ballgame but got down by 18 at halftime. We got within six in the fourth quarter but just didn’t have enough gas to pull out a win. Our kids played very hard, and we had good games from AJ Coleman and Zack Hill. The kids played hard and did well all year long. We have a young team with several juniors returning next year, which is always a good thing,” said Head Coach Willie Edwards.

Philstaviou Dowdell had a three for the Tigers (15-4) two minutes into the game. AJ Coleman got the Bobcats on the board (20-7) with four free throws for a 4-3 lead. Javerious Askew then drilled consecutive threes, and Jordan Rambo made a layup for an 11-4 lead. Jabarri Hill and Terry Davis answered right back with two long-range shots and cut the deficit to 11-10. The two teams traded baskets the rest of the first as DHS led 16-14.

Jabarri Hill went one-of-two at the line as JaKanye Mount converted a layup and gave OHS a 17-16 lead with seven minutes to go in the second period. Opp was unable to score again in the first half and fell victim to an opposing 19-0 run. Antojuan Woody scored nine points, while Daquan Doss sank a pair beyond the arc and propelled Dadeville to a 35-17 lead at the break. 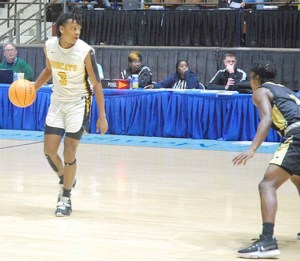 AJ Coleman works the ball down the court for the Bobcats.

Jabarri Hill opened the scoring in the second half with two free throws, but Dowdell buried a three to push the score to 38-19. A three-point play from Davis and five points by Coleman cut the deficit down to 38-27. Zack Hill and Jabarri Hill hit long-range shots as Opp trailed 42-33 after three.

Zack Hill made the score 42-36 with another trifecta to begin the fourth. Momentum shifted back the other way when Dadeville scored nine of the next 13 and took a 51-40 lead. OHS whittled the gap to 52-43 following a fast break three. Coleman swished a pair from the line with under a minute remaining as the score stood at 56-46. Doss added a free throw for DHS, while Woody ended the scoring with a layup. 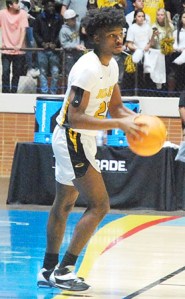 DaDa Stoudemire prepares to inbound the ball to an open Opp teammate.