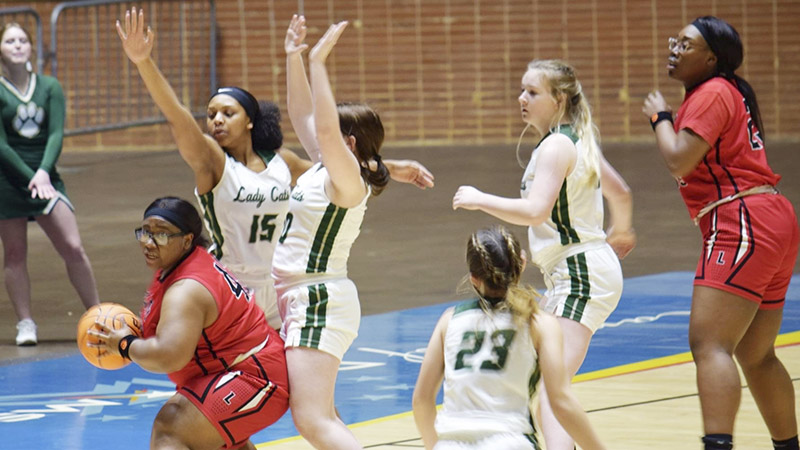 Florala's girls' basketball team ended the 2021-2022 season with a hard-fought loss to Loachapoka in the 1A Southeast Regional semi-finals at Garrett Coliseum in Montgomery. (PHOTOS CONTRIBUTED BY MELISSA WINDHAM)

Florala fought hard with a strong defensive showing but came up just short to Loachapoka 35-34 in the 1A Southeast Regional basketball semi-finals Saturday at Montgomery’s Garrett Coliseum.

Taylah Murph gave the Lady Indians (21-8) an early 3-0 lead with a three and pushed the margin to 5-0 with a jumper. After a free throw by A’myah Burks, Sharae Coleman put the Lady Wildcats (24-7) on the board with a layup. Destiny Dennis extended the lead to 8-2 and closed the opposition’s scoring in the opening period. Kyndra Anthony and Coleman knocked down back-to-back shots beyond the arc and forced an 8-8 tie. Anthony then converted a fast-break layup for a 10-8 lead after one. 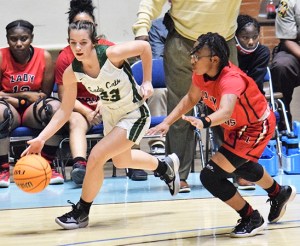 Briana Jones tied the score at 10-10 nine seconds into the second, but Alyssa Thames roared back a minute later with a majestic three for a 13-10 lead. Burks followed with a layup, while Murph added a pair of free throws. Coleman gave FHS a 15-14 lead with a bucket just over a minute later. Murph used a layup as Burke ended the first half with a tip-in and gave LHS an 18-15 halftime lead.

The two teams went back and forth after the break with two ties and three lead changes. Thames drew the Lady Wildcats even at 18-18 with a long three in the opening moments of the third. Jones and Jasmyn Thomas grabbed the momentum back and gave the Lady Indians a 22-18 advantage. Coleman then scored six straight points and built a 24-22 lead. Jones responded with five points during an 8-0 run, and Loachapoka took a 30-24 lead. Florala closed the gap to 30-27 with a three from Anthony in the final minute of the period.

Coleman led off the final eight minutes with a layup and free throw for a 30-30 tie with six minutes remaining in the contest. Cheyenne Regan went one-of-two at the line, and Coleman had a pair of foul shots for a 33-30 margin. Murph sank a clutch three and knotted the score yet again at 33-33. Coleman gave FHS a 34-33 lead with 1:58 to go in the contest, but Thomas made the game-winning layup with 19 seconds left on the clock. LHS held on despite allowing two shots in the final seconds. 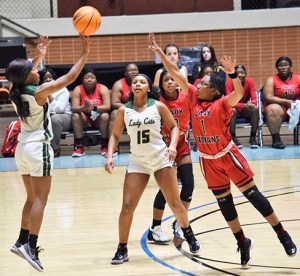 Kyndra Anthony, left, fires up a three-pointer for the Lady Wildcats as teammate Sharae Coleman follows the play closely with two Loachapoka defenders.

“Our girls came out and played hard, and we had a great season led by two great seniors. It was our first time playing in a regional game, and I thought our kids gave a really great effort. We played a really great team, but the girls have a lot to be proud of. I look forward to working with the young girls and continuing to build off of this success,” Head Coach David Bass said.