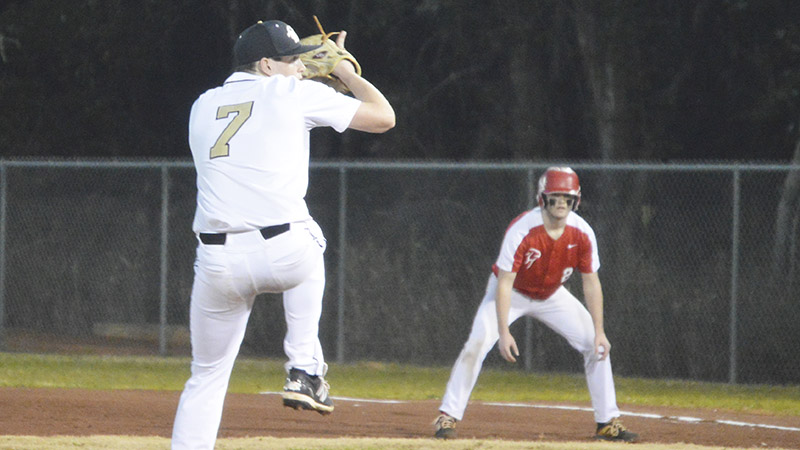 Straughn’s Houston Smith winds up to throw a pitch to the plate as Pleasant Home’s Mason Anderson gets a short lead at first base. (PHOTO BY ZACK MAIO)

Both teams gave it their all in a wild game with 17 total runs, but Straughn held on for a 9-8 varsity baseball win at Pleasant Home Monday.

It was the first varsity win for Andrew Lowery. 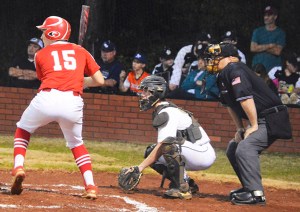 Nathan Fowler, left, bats for the Eagles as Jared Hawkins prepares to catch the next pitch for the Tigers.

“It wasn’t pretty, but our guys kept fighting, and we were able to come out with a win. We’ve still got a lot of work to do, especially at the plate. We had a six-run lead heading into the bottom of the sixth, and they cut it to a one-run game. We weren’t able to come through for any runs in the top of the seventh but were able to hold them from scoring in the bottom. It was good for our guys to have to fight through adversity and find a way to win. Hats off to Pleasant Home. Coach (Cody) Sellers is doing a great job with those guys,” Lowery said.

Despite the final outcome, neither side scored until the fourth inning. Abram Guilford was hit by pitch with two outs in the top of the first inning but thrown out trying to steal second. Mason Anderson took a walk in the bottom half and swiped second, but a fly out to right ended the inning. Josh Hawkins escaped a jam in the top of the second after the Tigers (1-1) put two runners on the bases. Ty Clark singled with one away for the Eagles (0-2) as Houston Smith struck out the side. Hawkins retired SHS in order in the top of the third. Frank Gafford singled and took second on a sac bunt, but Smith held PHS in check. 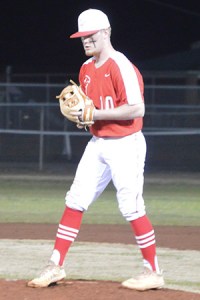 Josh Hawkins took the mound for the first PHS home game of the 2022 baseball season.

Guilford opened the fourth with a leadoff single and moved to second on a passed ball. Cal Ashberry lashed an RBI single and drove home Guilford from second as Straughn grabbed a 1-0 lead. Ashberry went into scoring position on an error, and Cody Lowe entered the game to pinch run. Lowe reached on a groundout by Zayd Rogers. Riley Brooks then hit an RBI infield single and doubled the lead to 2-0. Hawkins picked up a strikeout and avoided further damage. Clark and Landon Kelley earned singles in the lower half of the frame. Pleasant Home cut the deficit in half to 2-1 when Jordan Davis earned an RBI single and plated Clark.

Nathan Fowler took over on the mound in the top of the fifth. Ashberry extended the lead to 4-1 with a towering two-run homer and cashed in Guilford who drew a free pass. Samuel Hammett toed the rubber as the Eagles answered right back. Fowler then did his part at the plate with a clutch single and brought home Anderson and Hawkins for a 4-3 deficit. Hammett regained momentum for the Tigers and promptly set down the next three batters in order. The floodgates really opened up in the sixth when each team scored five times. 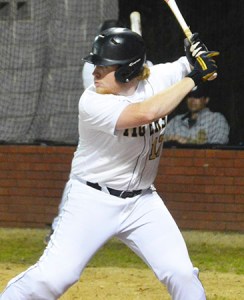 Cal Ashberry gets set to follow through on his home run swing, which gave SHS a 4-1 lead in the fifth inning.

Emory Melvin led off the top half with a single before Taylor Sikes and Ridge Wilson loaded the bases on consecutive walks. Hammett made the score 5-3 with an RBI single to plate Melvin. Jared Hawkins was then beaned as Sikes scored for a 6-3 lead. Ashberry drew a full-count walk and scored pinch runner Kaden Wiggins. Rogers was hit by pitch as Hammett scored, while Melvin knocked his second safety of the inning to give SHS a 9-3 lead. Anderson helped his own cause with a two-run single as Kelley and Brodie Griffin crossed the plate for PHS. Josh Hawkins then laced a huge two-run double to the gap as Gafford and Anderson closed the hole to 9-7. Josh Hawkins made it 9-8 on a wild pitch, but Melvin stranded the tying run at third.

As loud as the sixth was, the seventh was the complete opposite. Anderson struck out two and retired the side with ease in the top half. Guilford took over in the bottom of the frame and also brought the heat with three straight strikeouts for the save. 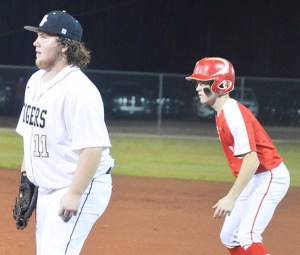 Zayd Rogers, left, and Ty Clark keep a close eye on the next play of the game.

The Eagles play Hillcrest-Evergreen in a varsity-only game Wednesday, Feb. 23 at 4:15 p.m. The Tigers remain on the road and visit Elba Friday, Feb. 25 at 5 p.m.