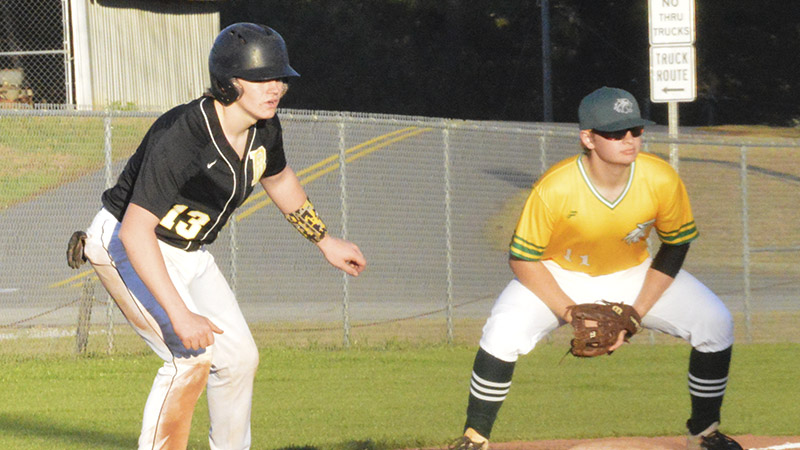 Red Level's Walker Simmons, left, gets a lead off third base as Florala's Wyatt Brooks plays on defense.

Florala built a 10-run lead in the fourth inning and held on for a 17-15 varsity baseball win Monday at Red Level. 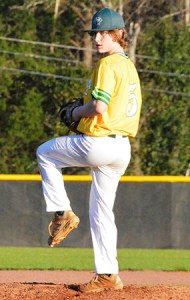 John Howell started the game on the mound for the Wildcats against Red Level.

“I thought we played complacent after the second inning. We built a large lead early and hit the ball well, then I guess we felt like the game was over and our effort showed that. Credit to Red Level and Coach Smith’s guys for playing hard and making a strong run late in the game. We have started the season out with four wins and one close loss to 5A Carroll-Ozark by a 2-1 score. This is our best start in my four years coaching baseball here. The kids are excited for the early success but still working hard to reach our end goal to win an area championship,” FHS Head Coach Tyler Zessin said.

The Wildcats (4-1) took a 4-0 lead in the top of the first. Dalton Jackson drove home Johan Zamora with the first run on an RBI single to center. Seth Bundy grounded out but made the score 2-0 when Jackson scored. John Howell and Wyatt Brooks each scored with two outs after an error kept the inning alive. Jentry Lee struck out Hunter Kilpatrick to end the rally, and the Tigers (0-2) rallied in the bottom half. An error and two walks to Logan Jordan and Brett Jordan loaded the bases. Walker Simmons was then hit by pitch to make the score 4-1. Kennith Huckabaa then rolled into a would-be double play, but another miscue led to two more runs and a 4-3 game. Howell struck out the two batters to cap the inning.

Colby Strickland drew a leadoff walk in the second for FHS and scored on a throwing error when Zamora attempted a sacrifice bunt. Howell delivered an RBI single to plate Zamora and extend the lead to 6-3. A double play ended the top half of the second. Despite getting two runners on in the bottom half, RLS ran into a double play of its own and ended the threat with no score. 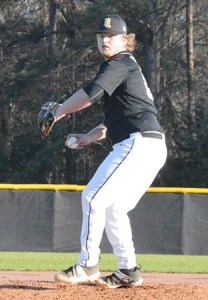 Jentry Lee was the starting pitcher for the Tigers against Florala.

Florala used a seven-run third to open up a 13-3 lead. Kilpatrick drove home Brooks with a single to right and then scored on a passed ball to make the score 8-3. Judd Goolsby ripped a two-run single down the left-field line and plated Strickland and Zamora who had reached on walks. Howell earned an RBI on a fielder’s choice for an 11-3 lead. After Bundy singled to reload the bases, Howell scored on another error. Ayden Brooks laced an RBI single to plate Bundy and extend the margin to 13-3 before the inning closed on a pop-up in foul territory.

Red Level once again had a response and quickly loaded the bases in the home half with no outs. Caleb Padgett picked up an RBI with a walk and scored Brett Jordan. Brock Skipper then rolled to third, but an error allowed Simmons and Huckabaa to cross home and take the score to 13-6. Brooks stopped the bleeding there with two strikeouts and a flyout to send the game to the fourth inning.

Strickland walked to begin the fourth before Zamora struck out. Goolsby and Jackson followed with consecutive singles to fill up the bases. Howell brought home Strickland on an RBI groundout before Bundy plated two more to give the Wildcats a 16-6 lead. Scoring was contagious as the Tigers fought back yet again in their half of the frame. Lee and Jordan reached on back-to-back errors. Another miscue brought Lee home to cut the deficit to 16-7. Skipper and Griffin earned RBIs with bases-loaded walks and made the score 16-9. Brooks then took over on the mound and struck out Tracy Coxwell and Logan Jordan to end the inning.

Johan Zamora, left, prepares for a stolen base attempt by FHS as Brett Jordan of RLS holds him at first base.

FHS loaded the bases in the top of the fifth, but Logan Jordan held serve and did not allow a run. Goolsby took over on the mound and retired RLS in order to keep the score 16-9 after five. Florala was poised to strike back with a pair of walks to start the sixth. Logan Jordan once again escaped with no runs allowed and sent action to the bottom of the inning. Red Level used the momentum and clawed back with another three-spot. Skipper was hit by pitch before Griffin and Coxwell walked to load the bases. Logan Jordan then helped his own cause with a two-run single to drive in Skipper and Griffin and close the gap to 16-11. Coxwell came home on a groundout as the score moved to 16-12 going to the seventh.

Goolsby ended the scoring for the Wildcats with a sacrifice fly and brought in Strickland, who had reached on a three-base error. The Tigers then put together a two-out rally in the home half. Simmons and Skipper scored when Griffin reached on an error that would have ended the game. A passed ball scored Griffin with the final run and closed out the long matinee at 17-15. 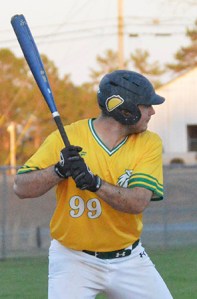 Dalton Jackson looks to make a powerful swing for Florala in the Wildcats’ 17-15 win at Red Level on Monday.

Jackson finished 2-for-2 with an RBI to lead Florala at the plate. Bundy went 2-for-4, and Goolsby was 2-for-6 as both earned three RBI’s. Logan Jordan led Red Level with a 2-for-4 showing and two RBIs. Huckabaa also had two RBIs, while Skipper tallied three RBIs.

Red Level remains home Tuesday, March 1 to take on Kinston in another 4:30 matchup. Florala travels to Pleasant Home to begin area play with a single game Thursday, March 3 at 4:30 p.m.