UPDATED: One arrested; another at-large after suspects crash vehicle

One person has been arrested and another is at large after fleeing from Coffee County and crashing a vehicle in Covington County on Wednesday. 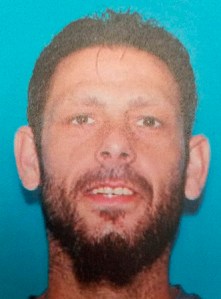 The two suspects were fleeing from the Coffee County Sheriff’s Office when the vehicle they were driving crashed in the Friendship Community. After the crash, the suspects fled on foot and the investigation soon revealed that the vehicle was stolen from Dothan.

After a search that included the Covington County Sheriff’s Office K9 Posse and the ALEA Air and Drone units, a female suspect was located and identified as Tracy Lynn Daniels of Dothan. She has been charged with first degree receiving stolen property.

A male suspect, identified as Troy Heath Grayson, is at large and is wanted by the CCSO for receiving stolen property as well as other outstanding warrants. He was last seen in the Friendship Community and is described as a 35-year-old white male, approximately 6’1” tall and weighing 200 pounds.

Anyone with information on Grayson’s location, or other information, should contact the Covington County Sheriff’s Office or the nearest law enforcement agency.