Cookies with Characters brings in record funds of over $93,000 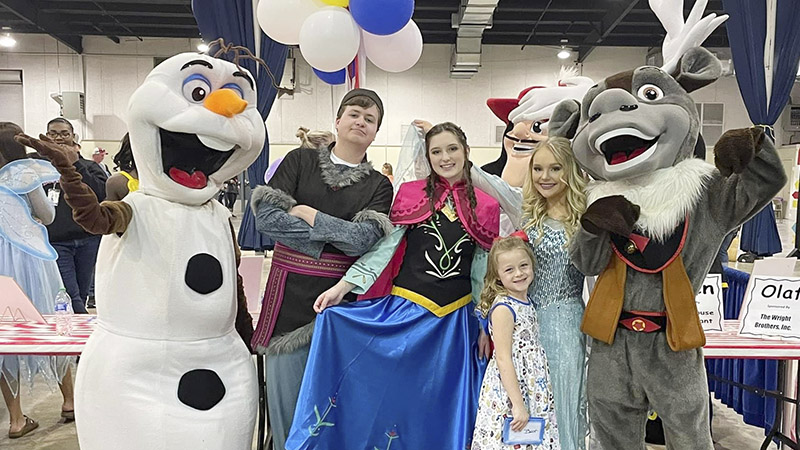 Allie Grace Page spends time with the cast of Disney’s “Frozen” during Meredith’s Miracles annual Cookies with Characters charity event on Saturday, Feb. 26, at the Kiwanis Center in Andalusia.

The annual Cookies for Characters organized by Meredith’s Miracles held Saturday, Feb. 26, resulted in a record-breaking event, raising over $93,000.

Meredith’s Miracles was established in 2005 in memory of Meredith McGlamory, a local child who lost her battle with cancer when she was only five years old.

This year’s Cookies for Characters event was the organization’s most successful year since its inception, according to Coordinator Kiley Spears.

“We are so proud of what Cookies for Characters has grown into. This year, our event brought in over $93,000 after having $77,000 last year. That was a great turnout for us,” Spears said.

The event takes place each year during the last weekend of February.

“We just had the idea and wanted to see if it worked. We had our first year of Cookies with Characters, and after the first show, we closed out and made $11,000 with only one show. Now, 16 years later, it has grown tremendously going from one show to three total. We now have two shows on Saturday and a third show on Sunday. We depend on Cookies with Characters to find most of our funding for Meredith’s Miracles. It is becoming such a great event for our community. We have people drive from all over and even had people drive from Georgia this year.”

Spears added that she has been involved with Meredith’s Miracles for 16 years and currently serves as the organization’s executive director.

“The community we live in is so supportive. Cookies with Characters is the biggest fundraiser for Meredith’s Miracles and our largest source of income to fund our families. Last year, we funded 584 trips and gave out over $114,000,” she said.

Meredith’s Miracles is a 501 C3 non-profit organization specializing in assisting families in 27 counties in Alabama with travel expenses during medical emergencies. “We exist to bring awareness of childhood medical issues and to assist families with non-medical expenses that can accrue when a child needs medical services.”

Each January, the characters used at the annual event are selected from auditions.

“We have a judges’ panel and the kids come in and audition to be the characters they want to be. We could not do it without them. They work so hard on this to make our event special,” Spears said.

“Thank you to all our sponsors. Some sponsors have been with us for 16 years, and it has grown so much. If you are interested in being a sponsor, please visit www.cookieswithcharacters.com to learn more. We would love for you to be a part of our event,” she said.