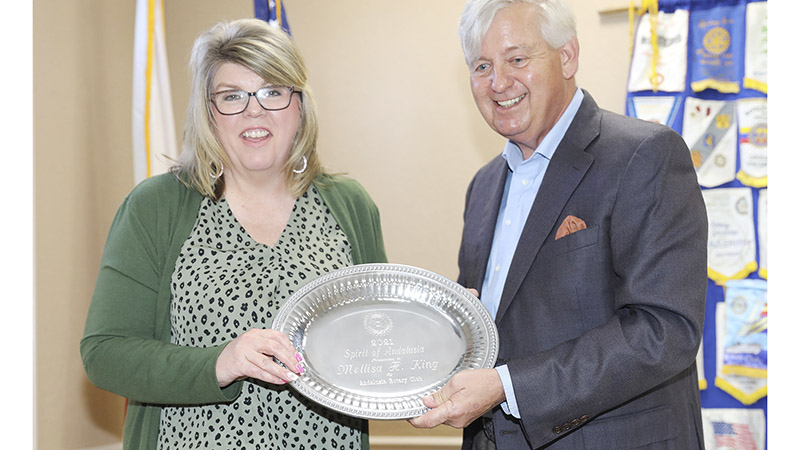 “I do what I do because I love where I live.”

Those were the words of Mellisa King as she accepted the Andalusia Rotary Club’s Spirit of Andalusia award on Tuesday, March 1.

Based upon all that she does, Mrs. King must love Andalusia a lot.

She is an insurance agent at the Sanbuck Agency and works as a professional caterer, but this wife, mother, and grandmother also manages to make extraordinary contributions to many civic causes, including the Andalusia Office Professionals Association, the Coterie Club, Pilot Club of Andalusia, the Full Tummy Project of Covington County, and the Andalusia Area Chamber of Commerce.

Mellisa has held each of the officer positions in the Pilot Club of Andalusia and has been the Alabama District Pilot International Governor, Governor-Elect, and Secretary.

She is active in the Andalusia Office Professionals Association, where she also has held all of the officer positions. Since 2014, she has served as co-chair of the Coterie Club’s Race for Kids and has held every office in that organization except president.

She has served on the Andalusia Area Chamber’s Board of Directors and has been a dedicated volunteer for the Full Tummy Project of Covington County since its inception.

The Andalusia Rotary Club presents the award annually to someone who embodies the Rotary motto, “Service Above Self.” Each Spirit of Andalusia recipient is named a Paul Harris Fellow, the award named for Rotary founder Paul Harris, and the highest honor that can be bestowed upon a Rotarian. A contribution to the Rotary International Foundation also is made in the recipient’s name.