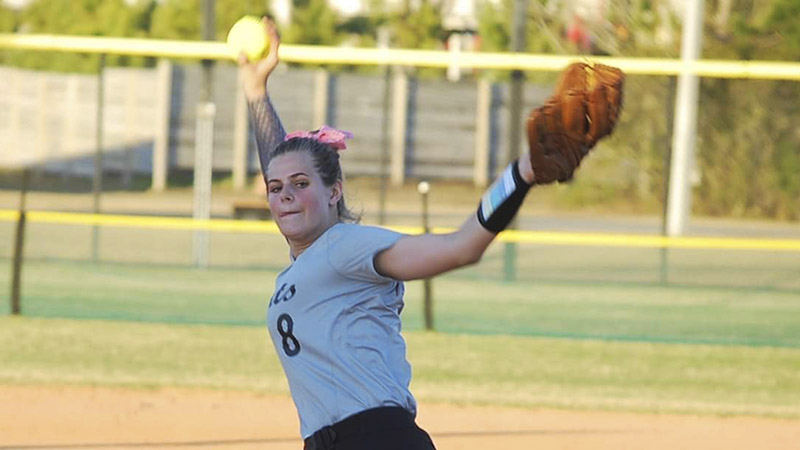 Reese Cauley winds up for a pitch to the plate in one of Opp’s tournament games in Panama City last weekend. (PHOTO BY TRIPP NORRIS)

Opp had a successful showing at the Florida-USA Softball Challenge in Panama City and won three out of four games over the weekend. 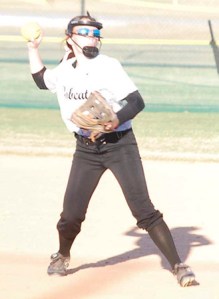 Madi Wilson fields the ball for the Lady Bobcats and gets set to make a throw to first.

“It was a good tournament for us, and we decided to go out of town and play some different competition. I felt like we had solid pitching all weekend, and our hitting went well besides the game with Chiles. We were able to face some different styles of pitching, which is always good when preparing for the future. We spent the night away from home, which is something they have to get used to when they make it to Gulf Shores. I felt like overall it was a good experience for our girls overall, and we will definitely be looking to go back next year,” said Head Coach David McVay.

The Lady Bobcats (9-4) began the tournament with a 6-1 win over Fort Walton Beach on Friday. Reese Cauley went 2-for-4 with a double and home run and scored two runs with an RBI. Madi Wilson went 1-for-2 with a double and two RBIs. Cauley did not allow an earned run and gave up only three hits while striking out 13 in a strong seven-inning winning performance in the circle.

OHS scored eight runs in the first inning of its next game and held on for a 9-5 win against Tate. Allie Wismer had a 2-for-4 showing at the plate with a single and triple and tallied three RBIs and a run. Jaidyn Ivey also went 2-for-4 with two singles, an RBI, and a run scored. Cauley went 2-for-3 with two singles. Caroline Courson earned the win and allowed four earned runs on seven hits while striking out 10 in all seven innings.

Opp fell to Chiles 3-2 in the first game Saturday and trailed 1-0 after six innings but took a 2-1 lead in the top half of the seventh before Chiles walked off with two runs in its half. Amaya Womack finished 2-for-4 with a single, triple, two RBIs, and a run scored. Wismer added a 2-for-3 showing with a pair of singles. Cauley did not allow an earned run and only had one hit recorded off her while striking out nine in four innings. Courson pitched 2 2/3 innings and struck out five while giving up one earned run and two hits.

The Lady Bobcats rebounded with an 8-6 win over Liberty County in the final contest. Cauley was 3-of-4 at the plate with two singles, a double, two RBIs, and a run scored. Wismer went 2-for-3 with two doubles, two RBIs, and two runs. Womack and Ivey both went 2-for-4 with a single, double, RBI, and two runs. Cauley allowed two earned runs and five hits while striking out eight in five innings. Courson got the win in two innings and gave up one earned run and two hits.