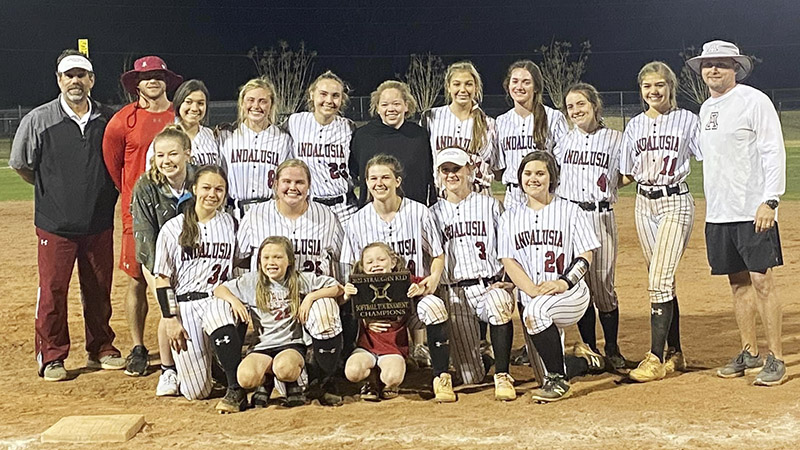 It was a great weekend for the Andalusia varsity softball team who won four consecutive games and won the 2022 Kirsten L. Dean Memorial Softball Tournament championship.

AHS (8-8) squeaked out a 6-5 win against Zion Chapel in its opening game of the tournament Friday. Taya Newton had a two-run homer in the bottom of the first inning. The Lady Bulldogs earned back-to-back wins over McKenzie by final scores of 19-0 and 18-1. Ashlee Findley hit a grand slam, and Maggie Furr added a triple at the plate. Andalusia took down ZCHS in the final contest, 9-7, and won the tournament crown for the third year in a row.

“I thought we played well and competed against the other teams and competed against ourselves, which is what we have been trying to get them to do. We ask them to play the game hard and play the right way, and they are working hard to do that. I’m very impressed with what they have done so far. Zion Chapel has a scrappy little bunch who played hard and with a lot of energy. They actually came out in the last game and got ahead of us, but we hit the ball and played a lot of small ball. Our girls responded extremely well,” AHS Head Coach Anthony Mikel said.

In other county action, Red Level (6-4) won two of three games. RLS defeated Straughn, 9-4 and Zion Chapel, 2-1. The Lady Tigers fell to ZCHS, 5-4, in an elimination game. Elizabeth Cross and Kaitlyn Beverly both went 2-for-3 at the plate and scored two runs apiece. Cross earned the win over SHS with two innings of work and allowed no hits on two runs (one earned) while striking out four. Beverly worked two innings in relief and allowed two runs (one earned) on four hits while striking out one.

Cross followed up with a one-run, four-hit performance against Zion Chapel and struck out eight Lady Rebels. Amaya Williams went 1-for-2 with a run scored and pair of stolen bases. Beverly gave up three hits and five unearned runs in five innings of the final contest. Kayden Lord went 2-for-2 at the plate with a run scored and an RBI.

“I was proud of the effort they gave on both days. We did not hit the ball like we should have on Saturday, and I think that coupled with some timely errors might have cost us. The girls definitely kept us in the games with their hustle and determination,” Head Coach Dusty Lee said.

Straughn (2-3) fell to Red Level in the tournament opener, 9-4, and rebounded for a 3-1 win over Carroll-Ozark. The Lady Tigers were eliminated by CHS in bracket play, 15-10.

“It was a perfect weekend for softball, and the weather was absolutely gorgeous both days. We could not have asked for better and know Kirsten was smiling down from above. She is still missed to this day, but we are blessed and grateful to have the opportunity to honor her each year with this tournament,” Head Coach Candace Tucker said.