Hammett elected to PowerSouth Board of Trustees

Seth Hammett, vice chairman of the Andalusia Utilities Board and former Speaker of the Alabama House of Representatives, was elected to the PowerSouth Board of Trustees at its January board meeting. 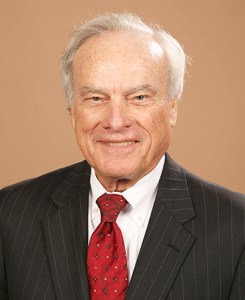 Hammett, who retired as PowerSouth’s vice president for business development last year, also served as President of Lurleen B. Wallace Community College and was founder and president of the First National Bank of Andalusia, which is now Wells Fargo Bank.

After retiring with 32 years of public service as a member of the Alabama House of Representatives including 12 years as Speaker of the House, Hammett served as director of the Alabama Development Office, now the Alabama Department of Commerce, and as Chief of Staff to Governor Robert Bentley. He was elected President of the Energy Institute of Alabama in 2016. Hammett continues to play an active role in the Alabama Workforce Council.

A two-time graduate of Auburn University, Hammett earned a Bachelor of Science degree and a Master of Business Administration degree. He also was awarded honorary doctorate degrees by Troy University and the University of West Alabama.

Hammett is a member and past Chairman of the Leadership Alabama Board of Directors. In recognition of his contributions to the state of Alabama, Hammett was inducted as a member of the Alabama Academy of Honor in 2013. He was elected to the Andalusia Leadership Hall of Fame in 2017.

Hammett and his wife, Nancy, have two adult children, Merrill and Catherine, and three grandchildren. In his spare time, he enjoys being on the golf course.