Opp walks off for rivalry win against Straughn 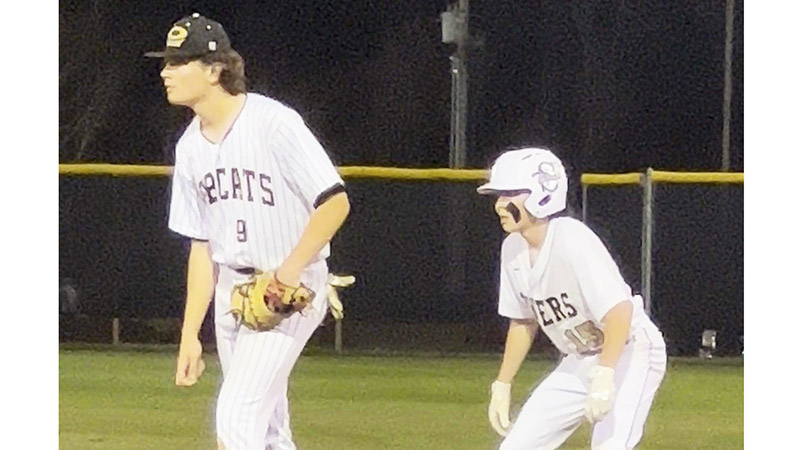 Opp’s Walt Spurlin anticipates the next play on defense as Straughn’s Kaden Wiggins takes a lead on first. (PHOTO BY AMBER WILCOX)

A bases-loaded hit by pitch in the bottom of the seventh inning lifted Opp to a 7-6 varsity baseball win over Straughn Tuesday night.

“Hats off to Straughn for playing hard and playing really well. Their first pitcher did a good job of keeping us off balance. Coach Lowery did a great job for them, and I can tell they are improving and getting better. I thought we pitched well, and both guys who threw gave us a chance to win. We need to work on hitting the ball the other way and hitting with runners in scoring position. We also made some mistakes we need to get corrected. I like the fight we had in the seventh to come from behind and score two runs to win when we led 6-3 in the sixth. Baseball is a mental game, and the team that makes the least mistakes mentally and physically usually wins. We need to improve in this area if we want to win area and make a deep run in the playoffs. It doesn’t get easier for us this week because we are playing 5A Andalusia Thursday. Coach Dent and his staff do a great job getting them ready to play us,” Head Coach Michael Cassady said.

Andrew Danford started the contest on the mound and struck out Cal Ashberry and Jared Hawkins as the Tigers (2-5) were retired in order. Robbie Gafford led off the bottom of the first with a single before Ashberry recorded two consecutive outs. Gafford then stole second and scored from third on a wild pitch. Tanner Burlison struck out to end the inning, but the Bobcats (6-4) took an early 1-0 lead.

Zayd Rogers opened the second with an infield single but became the first out when Samuel Hammett rolled into a force play. Riley Brooks reached on a two-out error and advanced Hammett to second. Taylor Sikes scored Hammett with a clutch RBI single as SHS evened the score at 1-1. Nelson Hall started the home half with a double and scored on a groundout by Walt Spurlin that gave OHS a 2-1 lead. Jordan Jacobs singled with two outs but was stranded at second after a pop-up closed the frame.

Abram Guilford wasted no time and launched a leadoff solo homer for a 2-2 tie in the top of the third. Ashberry and Hawkins followed with back-to-back singles and moved to second and third on a balk. Danford escaped the threat and retired the next three batters without allowing a run. Gafford and Ethan Cox also found themselves in scoring position, but Ashberry also got out of the inning unscathed. Both teams went 1-2-3 in the fourth inning, as the score remained 2-2.

Guilford was hit by a pitch with one away in the top of the fifth before Danford held Straughn in check once again. Houston Smith took over on the mound, and Gafford hit a mammoth two-run blast as Opp regained a 4-2 lead. Cox took first on a hit by pitch and swiped home on a double steal. The score remained 5-2 after Smith earned three outs. Rogers led off the sixth with a single, but Tanner Hall set down the next three hitters. Zavier Phillips took a two-out walk before a fly out ended the inning.

That set up a wild seventh inning on both sides. Sikes, Kaden Wiggins, and Guilford each singled to load the bases with no outs. Ashberry trimmed the deficit to 5-3 with a sacrifice fly and scored Sikes from third. Hawkins then blistered a two-run double and drove home Wiggins and Guilford for a 5-5 tie. Hawkins gave the Tigers a 6-5 lead when Rogers reached safely on a fielder’s choice. Hall avoided further damage and set up the bottom of the inning. Guilford took over on the mound as Cox started with a single. Following a hit by pitch to Cody Walsh and walk to Burlison, Cox raced home on a wild pitch and made the score 6-6. Colby Ballard scored the winning run for the Bobcats when Danford was beaned.

Guilford and Sikes each went 2-for-3 at the plate, while Hawkins and Rogers both added 2-for-4 showings for SHS. Ashberry allowed two runs (one earned) on five hits and struck out six in four innings on the mound.

“I was proud of my team putting up a great fight. We’re getting a lot better every day,” Head Coach Andrew Lowery said.

Cox went 2-for-3 for OHS at the plate and was followed by Gafford (2-for-4) and Hall (1-for-3). Danford gave up two runs (one earned) on six hits and struck out three in five innings. Hall earned the win in relief and allowed four earned runs on four hits in the final two frames.

Opp overcame a 3-0 deficit after one inning and edged Straughn 4-3 in the JV game.

Both teams return to the field Thursday, March 10. Straughn visits Brantley for a 4:30 game, and Opp hosts Andalusia at 6:30.