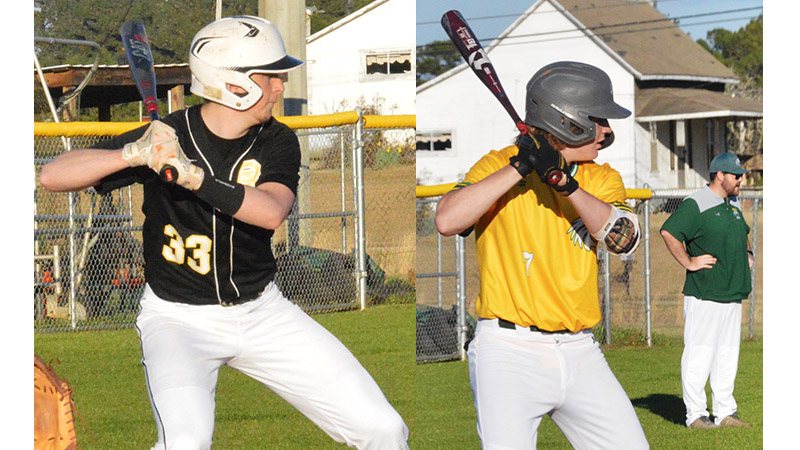 Both Red Level and Florala picked up close baseball wins Thursday. LEFT: Caleb Padgett remains focused at the plate for the Tigers. RIGHT: Judd Goolsby concentrates on the next pitch during a game for the Wildcats. (PHOTOS BY ZACK MAIO)

Red Level withstood a late push by McKenzie for a 6-4 area baseball win, and Florala walked off for a 12-11 win over Ponce de Leon on Thursday.

The Tigers (1-3, 1-0 1A Area 3) struck first with four runs in the top of the second inning. Caleb Padgett reached on a bunt single to begin the frame. Brock Skipper then reached on an error to put runners on the corners. Kennith Huckabaa gave RLS a 2-0 lead with an RBI single and scored Padgett from third as Skipper scored on another miscue. Tracy Coxwell and Lucas Jordan reached on two more errors as the score moved to 4-0. Cameron Ballard retired the following three batters in order.

MHS got on the board in the bottom of the third when courtesy runner Skylar Sanders scored on a groundout. Red Level extended the lead to 5-1 in the top of the fourth when Brett Jordan had a sacrifice fly to plate Lucas Jordan. After both teams went scoreless in the fifth, Lucas Jordan scored on a wild pitch to make the score 6-1 in the sixth inning. McKenzie used a two-out rally and trimmed the deficit to 6-3 with a pair of runs in the home half. Jaylen Stinson scored the final run of the game in the bottom of the seventh.

Padgett finished 2-for-3 with a run, while Huckabaa went 2-for-4 with a run and an RBI. Logan Odom led McKenzie at the plate with a 2-for-4 outing. The Tigers conclude the area series with McKenzie at home Friday, March 11, and travel to Brantley on Thursday, March 17 at 4:30 p.m.

The Wildcats (7-4) scored in every inning and defeated Ponce de Leon for a 12-11 win in a slugfest.

Both teams scored early in the first two innings, which led to a 4-4 tie. Ayden Brooks drove home Wyatt Brooks and gave FHS a 5-4 lead in the bottom of the third. The Pirates regained momentum with a two-run fourth and led 6-5, but it was short-lived. Judd Goolsby brought in Johan Zamora on a sacrifice fly to tie the score at 6-6. John Howell earned an RBI single to plate Kennith Jackson with the go-ahead run. Howell then crossed home and extended the lead to 8-6 after four innings.

Ponce de Leon cut the gap within one on an error in the top of the fifth before Florala gained some breathing room. Zamora scored on a passed ball and set the tone for Howell to retire the side in order in the sixth. Strickland drove in Brooks from third to stretch the score to 10-7 after six innings. PDL surged back with four runs in the final inning and held an 11-10 margin with three outs to go. Jackson scored the tying run with two outs in the last of the seventh to draw even at 11-11. Brooks took a free pass with the bases loaded, and Howell scored the game-winner for Florala.

Howell went 3-for-5 with two runs scored and two RBIs to lead the Wildcats at the plate. Zamora, Jackson, Brooks, and Seth Bundy each added a hit. Howell threw 6 1/3 innings on the mound and allowed nine runs (three earned) on eight hits while striking out eight. Bundy closed the game with 2/3 of an inning and allowed two unearned runs on one hit.

FHS will host Brantley in a JV and varsity doubleheader Monday, March 14 beginning at 4:30 p.m.