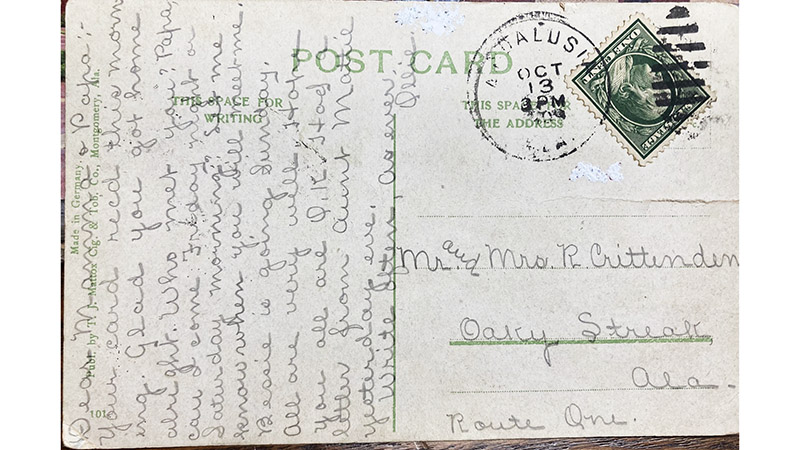 One of the big musical hits of 1935 was sung by Fats Waller – “I’m Gonna Sit Right Down and Write Myself a Letter and make believe it came from you.” Other popular singers continued to popularize this song in later years including Perry Como, Frank Sinatra, and even Paul McCartney in 2012.

There were so many comments from social media friends about last week’s column on the new Andalusia Post Office built in 1926, I hasten to mention some of these.

Ruthie Harris Sharp stated, “I remember being fascinated by several brass spittoons in there.”

Teri and Jerry Short replied, “Just think, it was someone’s job to empty those!”

Sandy Taylor Palmer recalled, “I remember going there with my big sister, Barbara Taylor. We bought 3-cent stamps for our parents and some 1-cent stamps for Barb’s penny post cards. I thought the new post office was a beautiful place with gleaming brass and marble!”

Diana Pelham Bledsoe added, “I remember the windows with bars where you bought stamps. Also, the poster of Uncle Sam pointing and saying, ‘I WANT YOU!’”

Maybe you readers are kin to some of these former postmasters. We need to complete this list and bring it up to date in the order of their service.

Readers will remember that there was some heated controversy about a new modern post office being built on the Law property on East Three Notch Street between the new First Baptist Church and the Methodist Church and “within the shadow of the East Three Notch Grammar School.” At least 500 Andalusia citizens who were opposed to the location proposed signed a petition that “gripped the city for a month or so” according to an October 1963 editorial.

One objection was that businessmen in the Court Square area enjoyed walking to the South Three Notch post office to check their daily mail. It was convenient. Some felt strongly that the traffic would pose a problem being so close to the school. Some thought that the geography of a city map should be looked at which should “stir the thought that Tisdale Street should be paved to allow another exit and entrance out of and into the new post office to avoid fender-bumpings.”

October 24, 1963 – “The decision of the location of the new post office in Andalusia is signed, sealed, and delivered. At least, that is the word of the Washington Post Office people to The Andalusia Star News. Washington is not about to reverse this decision.”

In my day and time, I only remember one fender-bumping that occurred. A real good friend of mine, let’s say a senior citizen who on occasion would drive backwards around the square (or part of the way) and who will remain nameless, pulled out from the post office one day in the heavy traffic, a little minor incident really occurred. All she could say to the policeman was “Please don’t call my son. He is too busy!” I understand he showed up anyway!

Andalusia Star News – November 18, 1965 – “EVERYBODY WILL PLAY ‘POST OFFICE’ TODAY – The new Andalusia Post Office will be dedicated in formal ceremonies today at 2 p.m. at the East Three Notch Street location that represents an investment of more than $250,000. Waller Construction Co. of Andalusia was the general contractor.”

“The new building of brick and masonry construction embraces some 14,000 square feet. Ample paved parking is provided both at the front and rear of the building.”

“Postmaster Henry Lee Mullins will introduce the program chairman, Probate Judge Leland Enzor. The invocation will be voiced by Rev. Bob Marsh, pastor of First Baptist Church. Mayor Howard Ham will give the welcome. Director of the Memphis Region of the U. S. Post Office, I. C. Pattison, Jr. will be the featured speaker. Music by the Andalusia High School Band under the baton of Maestro Jim Nettles will be heard at 1:30 p.m. Miss Merilyn Jones, head of choral music in the Andalusia schools will direct the singing of the National Anthem by the AHS Chorus. Miss Caroline Eiland will read ‘An Ode to the American Flag’ when the stars and stripes are presented. Andalusia Boy Scouts will raise the flag.”

“An Open House will follow the dedicatory program. Refreshments will be served.”

There are some penny post cards at the Three Notch Museum. This little rhyme was a penciled message written on one that featured a picture of the Covington County Courthouse in the middle of Court Square. – “I turned the key and peeped within, And old mail box, you’re empty again. Just fifteen times I’ve been out here, And there’s nothing in you but atmosphere, Instead of a letter of a dozen pages. There’s nothing in you but dust of ages. I’ll lock you up and throw away the key, For that little Louie’s gone back on me.” (Post card was addressed to Miss Louie Finch, Evergreen, Alabama)

Post cards cost only a penny to post at least from 1909 to the 1940s because we have some of those postmarked in the Three Notch Museum collection. Do you Remember When you mailed your last penny post card?