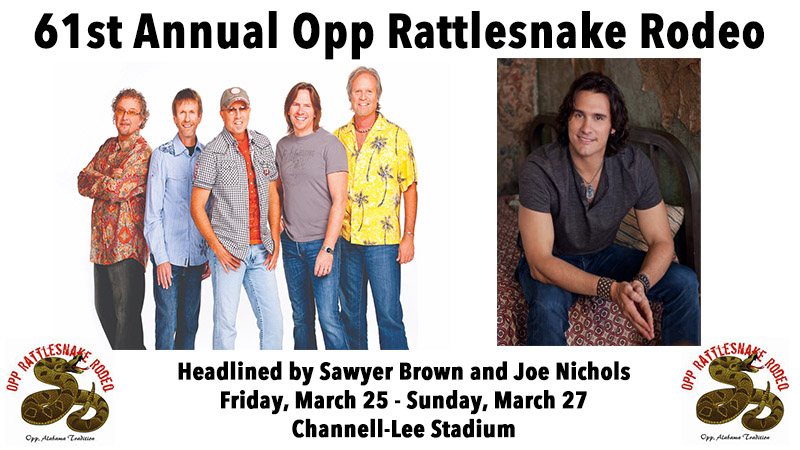 Gates will open Friday at 5 p.m., Saturday at 9 a.m., and Sunday at 10 a.m. The opening ceremony will begin at noon on Saturday.

Admission for Friday night will be free thanks to Horn Beverage. However, donations will be accepted at the gate and during the concerts. “100 percent of the donations received will go to Still Waters Adult Day Facility in Opp,” Rattlesnake Rodeo officials said.

Advanced tickets can only be purchased at Opp local banks: All In Credit Union, CCB Bank, and SIB Bank. A one-day pass is $10 each; a two-day pass is $15 each.

Sawyer Brown gained initial fame from winning Star Search and the country-rockers have since enjoyed a long, hit-filled career. Their self-titled debut album was released in 1985, and the debut single, “Leona,” climbed into the Top 20; its follow-up, “Step That Step,” went all the way to number one. Their sophomore album, “Shakin,’” was another hit, producing the Top Five single “Betty’s Bein’ Bad.” “This Missin’ You Heart of Mine” went to number two at the end of 1987. The band would go on to have a string of hits in the 1990s, including the number ones, “Some Girls Do” and “Thank God for You.”

Joe Nichols is an American country music artist originally from Rogers, Arkansas, and released his first album in 1996. Some of his hit songs include “Yeah,” “Sunny and 75,” “Brokenheartsville,” “Tequila Makes Her Clothes Fall Off,” “The Impossible,” and “Gimmie That Girl.” Nichols released his tenth album entitled “Good Day for Living” in 2022.

The concert lineup for the Opp Rattlesnake Rodeo with times subject to change is as follows: