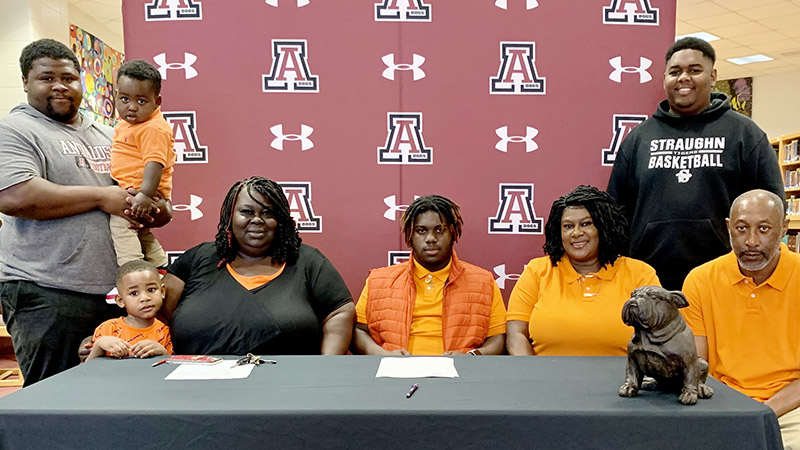 When Desmain Yelverton walked off the football field last November, it parlayed into the next chapter as he signed to play football for Jefferson Post-Graduate on Thursday. 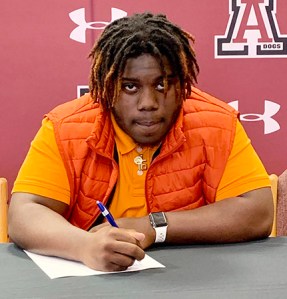 Yelverton signs his NLI to become a member of the Jefferson Post-Graduate Hawks.

JPG is a non-scholarship postgraduate junior college program located in Birmingham, which offers its students a two-year degree.

“I am grateful for the opportunity to continue playing because football motivates me to keep going. I look forward to attending Jefferson Post-Graduate and seeing all the different things their program has to offer and will teach me. I chose to continue playing football at JPG because I want to show my talents and improve my work ethic. It really means a lot to play at the next level,” Yelverton said.

Jefferson Post-Graduate’s goal “is to help high school graduates with a history in football or basketball to develop more maturity, education, and athletic skills so they become eligible for playing at a higher level of college.” 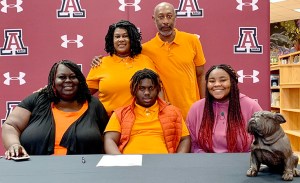 Yelverton’s family is excited to watch him play football at JPG in Birmingham.

Yelverton, who has played football since he was five, said he would miss being with the Bulldogs but is excited about becoming a member of the Hawks. 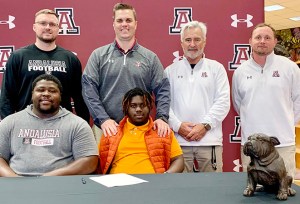 Yelverton’s coaches thanked him for his contributions to the Andalusia football program.

“I will miss everything about Andalusia, especially being on the football team. I learned a lot from my coaches at Andalusia and am grateful for their help in the last few years. They prepared me well every day and got me ready to compete. My senior year was the biggest highlight of my high school career and taught me everything I needed to prepare for this point,” he said. 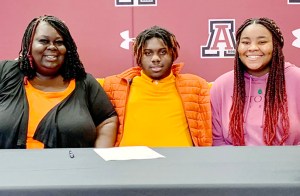 Yelverton celebrates his football signing day with his mother and grandmother.

Yelverton added that having the support of his family and friends means a lot. “They have all been there for me and motivated me to keep going. Playing football here was really special to me, and I will always remember my time on the field at Andalusia.” 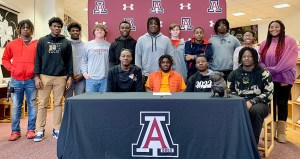 Desmain Yelverton was grateful to have his friends witness his signing to the Jefferson Post-Graduate football program.

“I’m very proud for Desmain to get this opportunity. Here in Alabama, our junior colleges don’t play football, but now you’re seeing more of these prep schools pop up. Whether it’s just for one year or two, it allows kids the opportunity to play beyond that. From everything I understand, he is going to a good place, and it will give him another year to work on his craft. Desmain was a kid who worked extremely hard and always did extra stuff in the weight room. He grew into a football player his senior year and was not projected to be a starter for us as a ninth grader. Because of his work ethic and love of the game, he kept getting better and better and eventually worked himself into that role his senior year,” AHS Head Coach Trent Taylor said.

He is the son of Shakirah and Burtish Quarles with two older brothers, Montel Lee and Alex Sheridan. He will graduate from Andalusia High School on Friday, May 20, 2022.