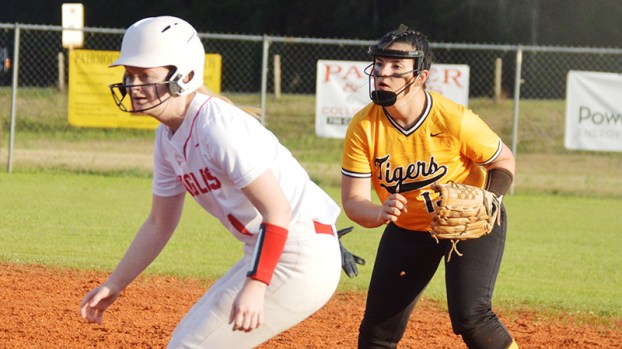 Kayden Weaver gets a lead at first for the Lady Eagles as Bailey Green of the Lady Tigers plays defense. (PHOTO BY ZACK MAIO) 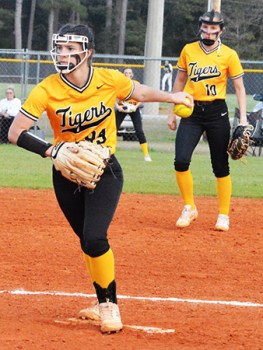 Red Level’s Elizabeth Cross gets set to throw a strike to the plate. 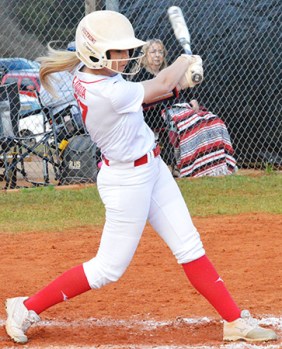 Logan Fuqua follows through on a swing during an at-bat for Pleasant Home.

Kaitlyn Beverly prepares to get a head start off third base as Audrey Hughes follows the next play. 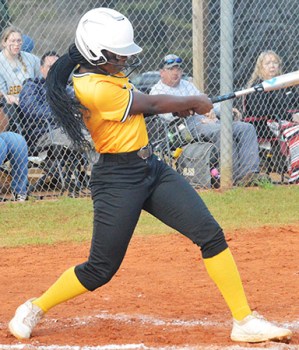 Amaya Williams puts the ball in play for one of her two hits on the day. 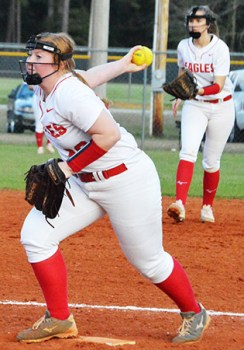 Emily Taylor of PHS winds up for the next pitch. 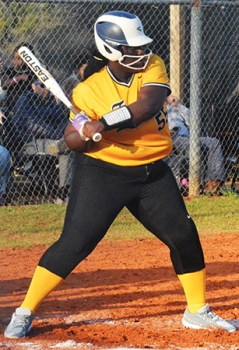 Ke'mariah Crittenden prepares to make a powerful swing for RLS. 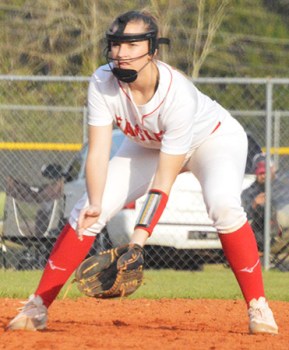 Amy Garner gets set to make a defensive play at shortstop.

Red Level posted 11 hits and used a three-run fifth inning for a 6-3 varsity softball win over Pleasant Home on Monday.

“I was really proud of our effort tonight. The girls came out ready to play, and it showed. We played unselfish ball, and everyone did what was best for the team. It’s always nice to get a win, but to get it at home against someone we have never beaten before just made it even sweeter. Now we have to get back to work and keep pushing forward,” Head Coach Dusty Lee said.

Elizabeth Cross retired the Lady Eagles (3-4-1) in order in the top of the first on just 11 pitches. Cross led off the bottom half with a single and scored the first run of the game when Amaya Williams grounded out to second. Kaitlyn Beverly followed with a deep fly ball to center for a triple, but Emily Taylor ended the threat with a strikeout. Kayden Weaver led off the second with a walk but was stranded at first after Cross struck out the next three batters. Ke’mariah Crittenden opened the home half with a scorching double down the left field line for the Lady Tigers (7-5) and was also left in scoring position. Taylor earned three consecutive strikeouts, and the score remained 1-0 after two innings.

Ivy Youngblood opened the next frame with a single and swiped both second and third. Following a strikeout, Hailey Ward laid down a sacrifice bunt and drew PHS even at 1-1 when Youngblood scored. RLS regained the lead in the bottom of the third and did not relinquish it the rest of the way. Cross stroked a leadoff single and advanced to third on an error. Williams then reached on a bunt single and plated Cross with the go-ahead run. After a pair of steals, Williams scored on a groundout from Beverly and made the score 3-1. Logan Fuqua had a nifty running catch in left for the third out of the inning.

Brianna Knoll pulled Pleasant Home within 3-2 on a two-out solo homer to straightaway center in the top of the fourth. Amy Garner continued the two-out rally with a single up the middle and stole second, but Cross struck out Audrey Hughes and preserved the lead. Kennedy Lord singled with one out in the bottom half, but that was all Red Level could muster when Taylor got a strikeout.

Cross worked fast and struck out two Lady Eagles in the fifth as the momentum carried over to the home side. Cross stayed hot at the plate with a double, and Williams added a single. The Lady Tigers played small ball with runners at the corners and nobody out. Three bunts (two for singles) brought home Cross and Williams. Crittenden then roped a double to center as Summer Beverly scored. Kennedy Lord followed with a double, while Taylor struck out Kayden Lord for the last out of the frame.

Neither side put a base runner aboard in the sixth inning as the score stood at 6-2 with three outs to go. Garner singled with one out in the top of the seventh and stole second. After moving up to third, Garner raced home on a passed ball and trimmed the deficit to 6-3. Cross fanned Youngblood for the final out of the contest.

Garner went 2-for-3 with a run scored and led PHS at the plate. Knoll and Youngblood both finished 1-for-3. Taylor threw all six innings and allowed six earned runs on 11 hits while striking out 10 in the loss. Cross paced RLS with a 3-for-4 showing and scored three runs. Crittenden and Kennedy Lord were next with 2-for-3 outings. Williams earned a 2-for-4 performance with two runs and two RBIs. Cross earned the complete game win with seven innings of three-run (two earned) and four-hit ball while striking out 13.

The Lady Tigers broke away from a 2-2 tie with six runs in the bottom of the third and defeated the Lady Eagles in the JV contest, 8-3.

Red Level visits Straughn for a JV-varsity doubleheader Tuesday, March 15 beginning at 4 p.m. Pleasant Home is on the road to Kinston for a doubleheader Thursday, March 17 with first pitch scheduled for 4:30 p.m.