An Andalusia man and inmate of the Covington County Jail was found guilty last week of charges that stemmed from an incident at the jail involving a self-made weapon. 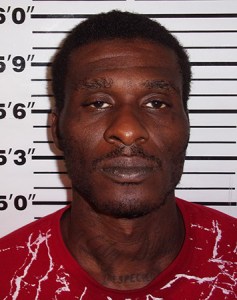 Joe Mitchell Dorsey, 39, was found guilty of first degree promoting prison contraband. According to officials with the Covington County District Attorney’s Office, testimony revealed that as an inmate on April 5, 2020, Dorsey began “causing problems” within the cell block where he was housed. When a corrections officer approached, Dorsey began waving a self-made shank, or knife, at the officer and threatened to stab the next officer who walked through the cell block door. It was also reported during the trial that Dorsey said he would make officers kill him.

“Corrections officers called for back-up to resolve the escalating situation at the jail. Many deputies responded that Sunday morning. A team of officers entered the cell block to take Dorsey into physical custody and locate the shank. Officers were able to restrain and remove Dorsey from the cell block and then located the shank within his mattress in his cell. Dorsey also admitted to officers that they would find the shank within his mattress,” stated a press release from the district attorney’s office.

During the trial, multiple officers testified about the volatility of the situation at the jail. Covington County Sheriff Blake Turman testified that Dorsey’s conduct created a dangerous situation for himself, for other inmates, and for responding officers, and his department was quick to contain the situation.

“Joe Dorsey is a dangerous person with little regard for those around him,” Stephens said. “He has a track record for this type of behavior in the jail and it simply will not be tolerated. Mr. Dorsey crafted his shank out of a piece of chain link fence that comprised a wall within the cell block. He created the handle from a black garbage bag. Sheriff Turman has now had that chain link fencing removed from the cell blocks to avoid issues like this in the future. I am thankful the jury followed the evidence in this case and convicted Dorsey for his crime.”

Dorsey was represented by Rod Sylvester and Circuit Judge Charles A. “Lex” Short presided over the case. Dorsey’s bond had been previously revoked as he has several other cases currently pending. Because of that, Dorsey remains in custody on this case as well, pending a sentencing hearing set for April 27, 2022.

District Attorney Walt Merrell complimented Stephens for her work in the prosecution, as well as Sheriff Turman and his deputies for their work.

“Sheriff Turman is the first sheriff we’ve had in some time that has been willing to seek prosecution for crimes that occur within the jail. Traditionally, those crimes have been not been pursued. I am thankful for the stand he has taken against crimes occurring within the jail and for the way he has taken back control of the jail from the inmates.”

Stephens also wished to express her thanks to Turman and each of the deputies who testified at trial to obtain this conviction. She also acknowledged a host of other Sheriff’s Office deputies and corrections officers who responded to the jail that day to peaceably resolve a dangerous situation.

First degree promoting prison contraband is a Class C felony typically punishable with a sentence of up to 10 years in prison. However, the State of Alabama has already given notice of its intent to seek sentencing under Alabama’s Habitual Felony Offender Act. Because Dorsey has nine prior felony convictions, including charges of first degree burglary, five convictions for third degree burglary, breaking and entering a motor vehicle, second degree theft of property, and unlawful possession of a controlled substance, he is facing a sentence ranging from a minimum of 15 years, to a maximum of life imprisonment.

“We have put Dorsey in prison before — on very long sentences. We can’t control when the State lets him go. We did all we could, but let’s hope that they won’t let this now 10-time convicted felon go anytime soon,” Merrell said.

In 2009, Dorsey was sentenced to 20 years in the Alabama Department of Corrections for four burglaries. That 20-year sentence expired and he was released from prison on March 27, 2019, just before his arrest on those cases currently pending.