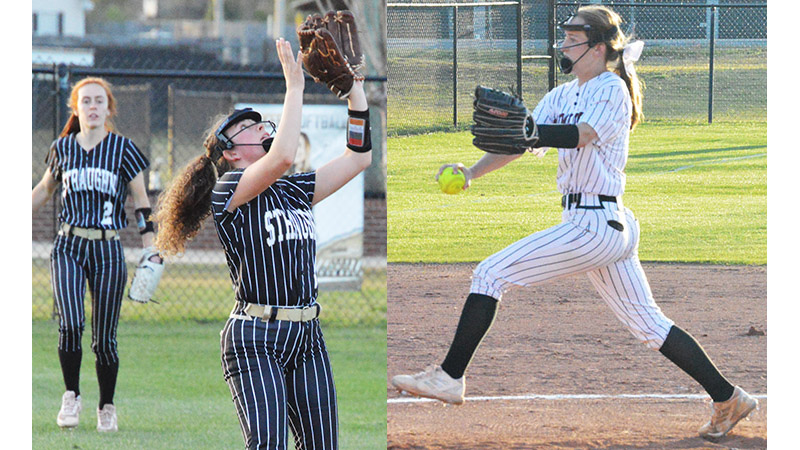 LEFT: Callie Carter gets set to field a fly ball at shortstop for the Lady Tigers. RIGHT: Maggie Furr throws a strike to the plate and was the winning pitcher with four strong innings for the Lady Bulldogs. (PHOTOS BY ZACK MAIO)

Andalusia broke away from a tie after the first inning and scored 12 straight runs to run away with a 14-4 win at Straughn in varsity softball action Monday.

“I thought they focused well and refocused when Straughn came back and tied it up. We focused on our job and the ball. We had a letdown late in the game on defense and became a little bit complacent where we were. We hit the ball well and ran the bases extremely well. Overall, I think we did a good job, and our girls worked and played hard tonight. I was proud of every one of them for the way they worked,” Head Coach Anthony Mikel said. 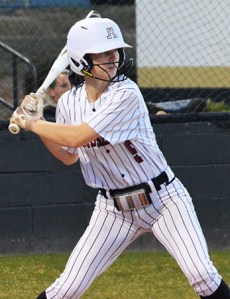 Erin Riley finished with four hits in four at-bats and led Andalusia at the plate.

Andalusia (12-11) loaded the bases in the first when Mollie Furr singled, Erin Riley doubled, and Olivia Mikel walked. Maggie Furr drove home Mollie Furr on an RBI groundout for the first run. Riley then stole home for a 2-0 lead. Kyleigh Bennett ended the threat with a strikeout of Ashlee Findley. Straughn (3-8) responded back in the bottom half and tied the game. Hanna Newman and Kyleigh Jackson singled as Abbey Glidewell scored an RBI double to drive home Jackson. After a walk to Abbi Hataway and Callie Carter reached on an error, Glidewell scored the tying run on a steal. Maggie Furr escaped further trouble with a strikeout.

Bennett retired the side in order in the second. Jackson singled with two outs in the home half, but the score remained 2-2 after two innings. Taya Newton singled to plate Riley and regain the lead for the Lady Bulldogs in the third. Mikel stole home as Amanda Majors kept the inning alive by reaching on an error. Maggie Furr scored to make the score 5-2. The Lady Tigers mounted a two-out rally with a single from Kaitlyn McVay and a double by Paris Center. Maggie Furr did not allow a run as an interference play capped the frame. 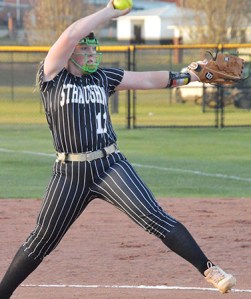 Kyleigh Bennett rocks a strike to the plate in the second inning for Straughn.

Riley pushed the lead to 6-2 with an RBI double in the fourth. Maggie Furr helped her own cause with an RBI triple and then stole home for an 8-2 lead. SHS was held in check in the bottom half and unable to put a base runner aboard. Riley continued to spark the offense with a two-run double in the top of the fifth. AHS strung together four more runs on three hits with two outs and took a commanding 14-2 lead

A pitch hit Glidewell, and Hataway singled to begin the home portion of the inning. Center hit a hard ground ball to first as Glidewell and Hataway scored with two outs for the final two runs of the game. 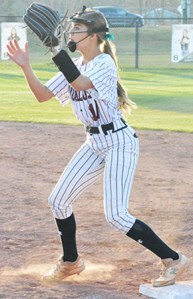 Olivia Cravey makes an out at first base on a bunt attempt.

Jackson finished 2-for-3 with a run scored, and Center was 1-for-2 to pace Straughn. Newman, Glidewell, Hataway, and McVay each earned a hit in the loss. Bennett threw 2 1/3 innings and allowed five runs (four earned) on four hits while striking out two.

AHS won 8-0 over SHS in five innings of the JV game. 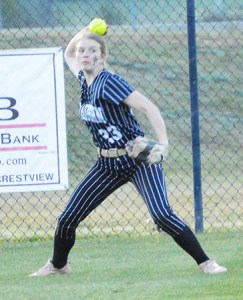 Melonie Harris fires the ball back to the infield after making a big defensive play.